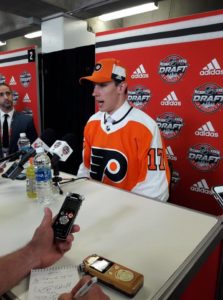 Darion Hanson – 6-3, 180 – G – Union Commit – He’s good post to post. Quick up and down. Covers corners well. Quick cover ups. His head trajectory in traffic needs work. He rarely sees that first puck in traffic. And then you can beat him glove side in traffic.

German Rubstov – 6-0, 187 – C – His is a bull on defense. He can’t help himself. Showed a powerful backhand. His wrist shot is heavy as well. Very accurate shot.

Linus Hogberg – 6-0, 175 – D – I really like his passing ability. Accurate. His one-timer is accurate as well but not flashy, which is ok.

Noah Cates – 6-1, 165 – LW – Stillwater High School – Looked a lot more confident in his second day. More spring in his step and a confident, fast shot. Took good angles on defense to cut off the offensive player. Decent speed to the net. Cates has promise.

Mikhail Vorobyev – Showed one of the best backhands in camp. Ferocious defender.

Morgan Frost – Was too fast for Derek Lodermeier and Cates. Frost blew past them. Has that two-step quickness. Great hands around the net can go high. Good snap to his wrist shot. Will lean on defenders.

Mark Friedman – Showed a very accurate and much stronger one-timer than I remember.

Pascal Laberge – Much stronger on his skates than last camp. Not as easy to bounce off him when he’s playing defense.

Isaac Ratcliffe – Very good agility shown. Snaps off a good wrist shot. Scary when he gets the puck in motion. Does the Ulf Samuelsson push on the helmet and neck move on defense.

Connor Bunnaman – Still not using all his strength to push opponent off the puck. His shot stings the goalie when it’s right. Can snipe the lower far corner and that’s hard for most goalies to defend.

Oscar Lindblom – Heavy shot. Plays stick driven defense. Bounces off players nicely in the crease to get off his shot. Shields off defenders well.

Wade Allison – Not tough enough on defense. Agile with the puck getting to the net. It’s his two-step quickness he has to work on. Tough in the corners. Maybe the toughest in camp in that regard.

Matthew Strome – His circles are good. His defensive instincts are really good. Knows how to lower his shoulder on defense.

Nolan Patrick talks about his injuries and more:

Tanner Laczynski talked about his year at Ohio State University and then some: