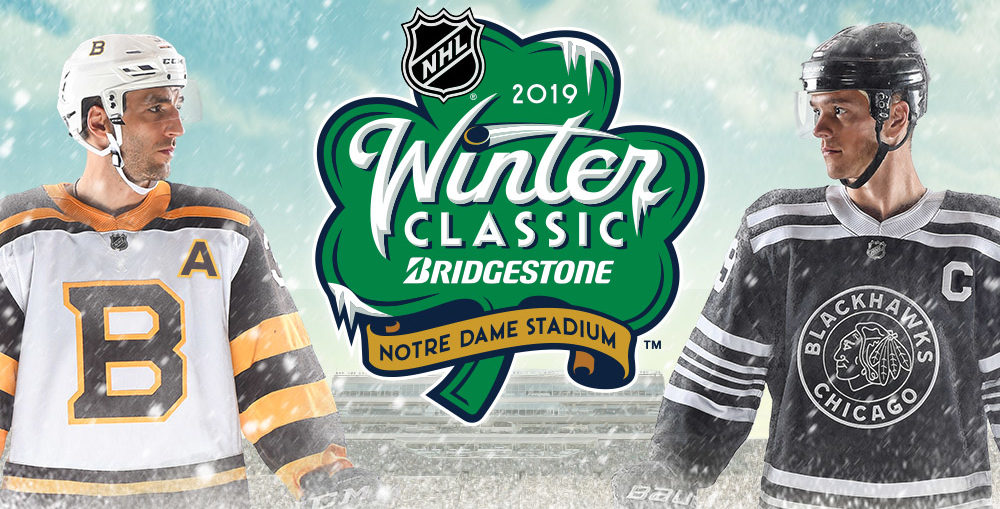 Sportsology is attending another Winter Classic and will bring you all the coverage right here. We’ve never missed one and never will. If you’ve never bought the book about it here’s the link:

A look at the 2019 Bridgestone NHL Winter Classic® “By the Numbers.”

2 – Number worn by Chicago Blackhawks defenseman Duncan Keith, the only player on the Blackhawks roster to have recorded a point in each of Chicago’s previous three Bridgestone NHL Winter Classic® games (1-2-3, 3 GP).

4 – The 2019 Bridgestone NHL Winter Classic® will signify the fourth Original Six matchup in a Winter Classic. Detroit defeated Chicago 6-4 in 2009, Toronto defeated Detroit 3-2 in a shootout in 2014 and in 2016 Montreal defeated Boston 5-1.

5 – The Bruins (1-1-0) and Blackhawks (0-3-0) combined for five prior appearances in the Bridgestone NHL Winter Classic®. Boston defeated the Philadelphia Flyers 2-1 (OT) at Fenway Park in 2010 and dropped a 5-1 decision to the Montreal Canadiens at Gillette Stadium in 2016. Chicago is in search of its first NHL Winter Classic victory following losses to the Detroit Red Wings (6-4) at Wrigley Field in 2009, the Washington Capitals (3-2) at Nationals Park in 2015 and the St. Louis Blues (4-1) at Busch Stadium in 2017.

6 – The NHL returns to Indiana for its sixth regular-season game in the state and first since 1992. The Chicago Blackhawks have played in all five previous matchups, including a 3-2 loss to the Boston Bruins on Jan. 21, 1954 at the Indiana State Fairgrounds Coliseum in Indianapolis.

12 – Number of stairs down from the Notre Dame locker room to the iconic “Play Like a Champion Today™” sign, the same route the Blackhawks will be taking to the field at Notre Dame Stadium on New Year’s Day.

15 – Number worn by Boston Bruins alumnus Dave Poulin during his hockey career at the University of Notre Dame. As a Hobey Baker Award finalist in the 1981-82 season, Poulin helped lead the Fighting Irish to a 23-15-2 record, a Great Lakes Invitational championship and a fourth-place finish in the CCHA. Following the conclusion of his 13-year NHL career, Poulin would return to his alma mater in 1995 and assume the position of head coach for the next 10 seasons according to University of Notre Dame Hockey.

15 – No. 1 hits Grammy Award-winning band Weezer has had to date. Weezer will be the on-field entertainment during the first intermission of the 2019 Bridgestone NHL Winter Classic, while Judah & the Lion will play during the second intermission. In addition, The Jacks will perform while both the Blackhawks and the Bruins take the ice for warmups.

18 – Number of hours the 2019 Bridgestone NHL Winter Classic Park™ will run from Saturday, Dec. 29 through Monday, Dec. 31 at Jay Pritzker Pavilion at Millennium Park in Chicago. The 2019 Bridgestone NHL Winter Classic Park™ will include autograph sessions featuring former Chicago Blackhawks and Boston Bruins greats, hockey interactives, giveaways, food, live music and a special appearance by the oldest and most revered trophy in sports – the Stanley Cup®.

19 – Average low temperature, in degrees Fahrenheit, for South Bend, Ind. on Jan. 1, according to accuweather.com.

26 – The 2019 Bridgestone NHL Winter Classic® will mark the 26th NHL® regular-season outdoor game contested. Of the previous 25 games that have been played, 14 of those have been hosted within football stadiums, 10 have been inside baseball stadiums and one inside a soccer stadium.

35 – Average temperature at puck drop, in degrees Fahrenheit, for the previous 10 Winter Classic

games conducted by the NHL.

88 – Number worn by Chicago Blackhawks forward, Patrick Kane, who leads the club in scoring with

88 – Number worn by Boston Bruins forward, David Pastrnak, who leads the club in scoring with

101 – As part of the countdown to the 2019 Bridgestone NHL Winter Classic® Mike Craig, NHL Senior Manager of Facility Operations, hosted an Ice Making 101 field trip for students from Chicago’s Funston Elementary School as part of the NHL & NHLPA’s Future Goals program, an Industry Growth Fund initiative. The students saw the STEM (Science, Technology, Engineering, Math) concepts they are learning in the classroom come to life during the Dec. 19 field trip at Notre Dame Stadium.

300 – Ton capacity of refrigeration trailer that will keep the ice cool at Notre Dame Stadium.

350 – Gallons of paint used to make the ice at Notre Dame Stadium white.

588 – The Bruins and Blackhawks have faced off in 588 regular-season games since the 1970-71 season, with the Bruins holding a 615-567 edge in points over the Blackhawks (BOS 266-239-83—615; CHI 243-264-81—567). In addition, the Bruins and Blackhawks have met seven times in the Stanley Cup® Playoffs, with Boston winning five of those series. Most recently, the two clubs met in the 2013 Stanley Cup® Final, where Chicago defeated Boston in six games, a series that was decided when Dave Bolland tallied the game-winning goal at 19:01 in the third period of Game 6 (the latest Stanley Cup® game-winner scored in regulation).

708 – Number of players and coaches who have participated in the NHL’s 25 regular-season outdoor games to date.

1,123 – Number of players who have won the Stanley Cup® since the NHL assumed full control of the

1968 – The year Notre Dame’s hockey program was officially recognized as a Division I intercollegiate sport, after five years as a club team.

2011 – The Compton Family Ice Arena officially opened its doors on Oct. 21, 2011, in front of 5,022 fans, one of the largest crowds ever for a Notre Dame hockey game. An Anders Lee (NY Islanders) hat-trick led the Fighting Irish to a 5-2 victory over Rensselaer Polytechnic Institute.

3,000 – Gallons of coolant used to freeze the rink at Notre Dame Stadium.

14,934 – Career receiving yards registered in the by Notre Dame Football alum Tim Brown during his 17-year career in the NFL. Brown, the first ever Wide Receiver to win the Heisman Trophy, will be among a number of other Notre Dame Football greats honored at the Jan. 1 pre-game ceremonies including Rocket Ismail, Brian Smith, Jeff Faine, and Darius Fleming.

20,000 – Gallons of water needed to create a two-inch ice surface at Notre Dame Stadium for the 2019 Bridgestone NHL Winter Classic®.

100,000 – Dollars donated by the Chicago Blackhawks Foundation and NHL Foundation to the Robinson Community Learning Center (RCLC). Following the on-ice check presentation, youth hockey players from RCLC will be skating on the auxiliary rink.

35,000,000 – Number of albums sold worldwide by Grammy Award-winning band Weezer, who will headline the entertainment for the 2019 Bridgestone NHL Winter Classic®.

What fans need to know:

The National Hockey League would like to remind fans attending Tuesday’s 2019 Bridgestone NHL Winter Classic® about some traffic, parking and security matters. Here’s what attendees need to know:

· Due to anticipated traffic delays and security screening please plan on arriving early.

· Third party ticket “will call” drop off is not permitted.

· LIMIT WHAT YOU BRING:  Make sure to dress warmly, re-entry is not permitted. No outside food or beverages will be permitted into the stadium on game day.

· All bags are subject to search upon entry.

· For a full listing of prohibited items and additional fan information about the 2019 Bridgestone NHL Winter Classic please visit: https://www.nhl.com/fans/winter-classic/fan-guide

· For a full list of activities and schedule of events, please visit https://www.nhl.com/fans/winter-classic/park2019

Limited parking is still available (https://gameday.nd.edu/special-events/winterclassic/). Due to anticipated traffic delays and security screening, fans attending the game are reminded to carpool and arrive early.