You are here
Home > Hockeyology > Tarasenko Stars in 2017 Winter Classic 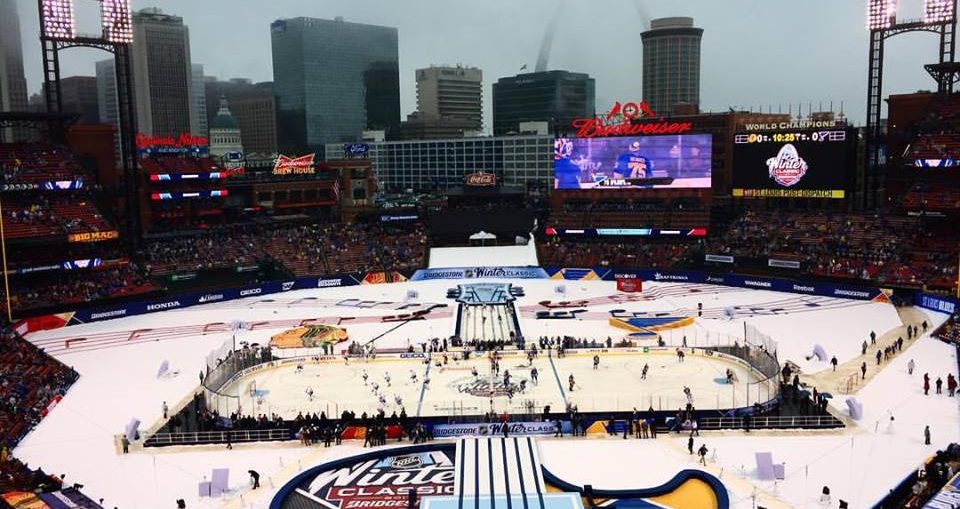 Share on Facebook Share
Share on TwitterTweet
Share on Pinterest Share
Share on LinkedIn Share
Send email Mail
Print Print
ST. LOUIS, MO – The rain was steady, the weather warm, yet the Winter Classic started promptly on time at noon. After checking with meteorologists, the powers that be felt the game could go on as scheduled without a hitch. It didn’t take long before the first goal was scored either.
Just 1:02 into the 1st period, defenseman Michal Kempny doubled his goal total on the season by firing a shot past Jake Allen from the point. Allen was mildly screened as the puck ricocheted off his left arm and right under the crossbar.
Coach Quenneville said of Kempny, “I thought he had a great shot right off the bat, got us going. And I thought defensively he’s been moving the puck quickly and he’s been getting better defensively and that’s the area where, if he improves, his overall game’s really going to be enhanced. But he’s been good.”
The Blues were being outshot at 5-1 halfway through the 1st frame, but found their skating legs and ended the period with an 8-6 lead in shots. Still the score was 1-0 in favor of the Blackhawks.
After exchanging back and forth action during the first part of the 2nd period, Patrik Berglund was able to crack Corey Crawford. Jay Bouwmeester was breaking in on the left wing and threw the puck to a trailing Berglund who banged in a one-timer to tie the game at one apiece. It would take the 3rd period to declare the winner.
St. Louis outright dominated in the 3rd period dictating the pace of the game for the majority of the period. Each team had an opportunity on the powerplay, but neither could cash in, until a fortuitous bounce gave the lead to the Blues.
On a two-on-one break, Robby Fabbri dished a pass to breaking Vladimir Taranseko. Tarasenko was unable to get a quality chance off and tried throwing it back in front of the net where Niklas Hjalmarsson inadvertently redirected the puck into the net passed Corey Crawford giving the edge to St. Louis. At the 13:58 mark of the 3rd, Tarasenko wasn’t finished as he sniped another goal putting the game out of reach much to the elation of the home crowd in front of 46,556 fans – a sellout. Alexander Steen sealed the game with an empty-net goal with 1:14 remaining in the game securing a 4-1 win for the Blues.
“[My first goal] wasn’t on purpose,” Tarasenko said. “The second one, my line just created a good chance for me and it’s really important win for us and I’m excited about my goals. We have a great team, we have a great goalie, and we really needed those two points, especially against Chicago.”
“I felt we played great today. I thought we ground on them hard, I thought we did a great job in getting pucks deep. I thought we managed the game really well. I thought we played really well,” said Blues head coach Ken Hitchcock. “This is the same way we played against Philadelphia, and the way we played for the first half of the game against Nashville. I thought we played a really smart, sound hockey game and, quite frankly, deserved to win.”

Shawn Reznik
I'm the author of 10 books. They are all listed here: https://www.amazon.com/Russ-Cohen/e/B0034P5DNC%3Fref=dbs_a_mng_rwt_scns_share If you're looking for autographed copies just go to my twitter @Sportsology and DM me.