Tito Ortiz is 44-years-old, in the world of MMA fighting, and most sports, the words that would follow would be and is happily enjoying his retirement. Instead, he’s training as hard as he ever has and is getting ready for a very public fight against former WWE champ, Alberto Del Rio (Alberto Rodriguez is his real name) on December 7th via pay-per-view for Combate Americas.

“I think what keeps me motivated is my kids. I’m doing the hard work. Just having a healthy body, just loving to train. Not having any injuries. Not having a nagging boss. Having a supportive girlfriend. Having a good life,” Ortiz stated. “Having a happy family. When you have support; you just work that much harder. This is what I’ve been doing half my life, for 22 years.”

Playing in pain, fighting in pain, is part of the job but it makes it more of a job than a joy. He could tell you all the procedures he had and that would take up most of the article.

“I was in pain from 2003 through 2017. I would get a surgery done and I’d be good for six months, then I would have an injury get it fixed,” Ortiz revealed. “Then I would go through it all over again…Now I feel good. I feel like a million dollars.” 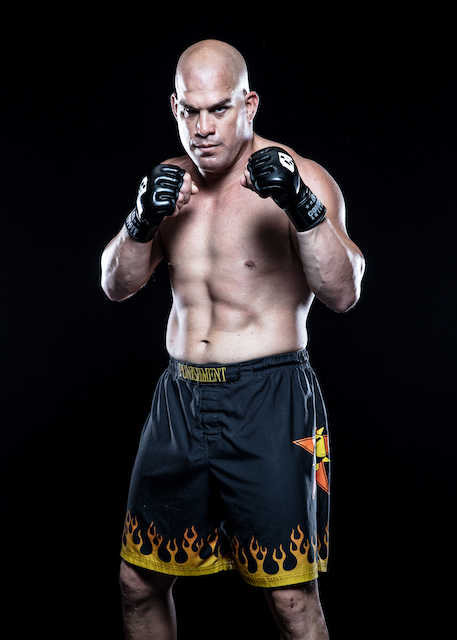 Del Rio was a WWE champion and Ortiz is treating him as such.

“I’m not going to count my chickens before they’re hatched. I have to prepare right for this fight. I put in four or five days a week, twice on Saturday and day off on Sunday and continue to do it. I’ve been at it the last 14 weeks,” Ortiz said.

Is Ortiz going to make Del Rio more famous in MMA just by stepping in the ring? “I’ll make him famous for about five minutes,” Ortiz laughed. “That’s my goal. Get this fight done in the first round. If he gets out of the first round that means he’s worked hard, he’s worked his butt off. I respect the guy. I wouldn’t have started my camp when I did if I didn’t respect him.”

Ortiz knows how to train for this mentally and physically. That gives him an edge. He reminds me of George Foreman around the same age when I attended his heavyweight fight against Evander Holyfield. The only difference is, Ortiz has a better chance of winning this fight.

“I’ve been grinding. I’ve been diligent. I’m making sure I have every rock behind me unturned,” Ortiz expounded. “I still have more work to do. I respect Alberto. He has some big balls to want to fight me….I have five world titles. He’s a world champion with two titles. Winner takes all. I’ve always wanted to be a WWE champion and at least hold the belt that’s mine. Not going and buying a replica one. The real one. So, I want to take it from him.”

Ortiz is keeping an eye on how Del Rio is training. He did say that it’s important to do so.

“I focus on what I’m doing but I do try and keep an antenna up in the air. Of course, you have to do your homework. You have to see what he’s doing.”

This could be one of the best fights of the year. Ortiz is ready for anything, that’s for sure.

Priced from $30, tickets for the Combate Americas ‘Tito vs. Alberto – What Side Are You On?’ live pay-per-view television event hosted by TS-1 Promotions, are on sale at Ticketmaster.com.