Adam Graves will be at Empire Casino this evening at 6:30 PM for a meet and greet. He is one of many members of the 1994 Stanley Cup team who are universally respected, and for good reason.

“First of all I was fortunate to have the opportunity to play for the Rangers, being a New Yorker, and my two youngest, my daughter and son were born in New York and I’m very proud of New York,” said Graves. “I was very, very, fortunate with the people that I was surrounded by on the ice when it comes to leadership, Mark Messier, Brian Leetch, Mike Richter and all those great players I was lucky enough to play with. But also, the staff. I think of our community relations staff and our hockey staff. Our grass roots program where people learn to try hockey for free in all the different platforms we have. It does give you an opportunity to get out and meet the fans. Meet the people that support you and really connect.”

He’s a down to earth man who relates to the fans.

“We all have our good days and bad days and I’ll be the first to tell you that I was lucky enough to play over 700 games for the New York Rangers. Not all of them were great games and not all those shifts were great shifts. I had some tough nights and made a lot of mistakes along the way,” he admitted. “I worked as hard as I could and fortunately enough when you get the opportunity to win the Stanley Cup in New York you really have to reflect back and pinch yourself and think how lucky you are.”

Many Ranger fans will remember that Graves was drafted by Detroit in 1986. And like most drafts things don’t always go as planned.

“For me that was back, and I don’t want to date myself, but that was when there were 21 teams,” Graves chuckled. “Not the current 30 and going to be 31 when Vegas joins the NHL next season. Back in those days I was the first pick in the second round and I think going into that draft I was rated going somewhere from 14 and 20 and I ended up going right across the river where I played junior hockey in Windsor. Detroit drafted Joe Murphy first overall and I was lucky enough to be picked with the first pick in the second round and just looked at it like an opportunity. Detroit was going through a rebuild and ended up in last place in the NHL the previous year. They had a cornerstone, a generational player in Stevie Yzerman. Who I was lucky enough to learn from and play with for parts of three seasons and certainly become a friend of.” 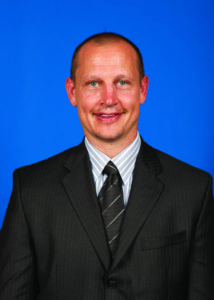 Graves earns his paycheck and gets to scout and report back to Jeff Gorton just what he sees in young hockey players.

“It’s a great opportunity and with our staff led by Jeff Gorton and Chris Drury, Jim Schoenfeld and the experience of Glen Sather, certainly a gentleman who oversees the entire organization and then to our staff,” Graves added. “When you think about people like Gordie Clark who handles the draft and Steve Greeley, they are guys with great experience. For me when I’m out seeing prospects and I do see some of the tournaments but I don’t get to see as many games as some of these other guys. For the draft, itself I enjoy listening and learning. They have such great experience. They are the most talented people in the world in handling and evaluating.”

His take on Michael Grabner was interesting. Better players seem to be one of the reasons he’s been near the top in goals scored this season.

“He’s always been a talented guy. He has had seasons where he scored a lot of goals. I think it’s opportunity. It’s confidence,” Graves mentioned. “When you have those things the puck certainly seems to find the net. I think for Michael it’s been a good fit. And certainly, in Toronto last year they were in the middle of making some moves they are benefitting now with Auston Matthews and other young players like Marner and Nylander.

When the Rangers honored the late, great, Steven McDonald, the man who they have named a team award after, a former New York City detective and hero it hit home for him.

“I love meeting people,” Graves said. The connections we make along the way. Unfortunately, we were reminded about that this week with office McDonald. When you talk about the gift that the game has given you. And for me it’s meeting people like Steven McDonald along the way with his family, his son Conor and wife Patti Ann, those are the true gifts. It’s fantastic going to an event that you share the same passion with.”

Fans from all over the tri-state area are encouraged to hop on the Rangers Bandwagon, which includes a special Rangers bus departing from Madison Square Garden (outside Café 31, 220 W. 31st St. between Seventh and Eighth Ave) at 5:45 PM Saturday and arriving just in time to spend some quality hockey time with Graves. 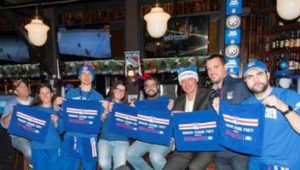 The viewing parties inside Dan Rooney’s Sports Pub are FREE for all to attend and begin one hour before the puck drops.  Joining Rangers fans for the festivities, including the bus ride from the Garden, will be the Rangers Blue Crew who will put fans to the test with Rangers trivia and offer an array of Rangers swag as giveaways during each intermission. Fans can also enjoy a variety of food and beverage specials, including $1 wings, $2.50 bud lights and more.