This theatre is a quaint, older venue, fully restored with beautiful ceilings and perfect acoustics.

The show opened up with the “School of Rock” musicians doing a set. I enjoyed it and thought that the Heart hit tune “Barracuda” sounded good.

Staten Island is a Yes hotbed and when Anderson opened up with “Owner of a Lonely Heart” the crowd erupted. The violin played by Jocelyn Hsu added an extra dimension to the hit song. That would be a theme for the evening. This band is very different and super talented.

“Yours is No Disgrace” was the next song and that’s when Chris Charles showed off a bit on the sax. Tommy Carlton played it beautifully on guitar. I’ve heard this song, so many times, by so many different Yes musicians and I felt I was hearing it for the first time.

Hsu was terrific again on the first single on the new album, “Makes Me Happy”. She played the ukulele, as Jon does on the video, and possibly better.

“State of Independence” was a nice surprise. A song from one of Jon’s most successful solo albums “The Friends of Mr. Cairo”.

After only one rehearsal on the second leg of this tour the band killed it on “Wondrous Stories”. A song that Jon has always knocked out of the park. 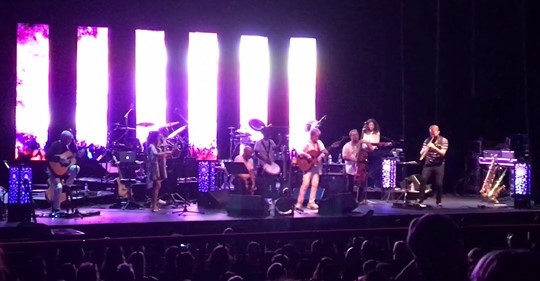 On “First Born”, Jon carried around a cheat sheet while he sang. He told the audience and laughed about it. It was a great moment.

Charles played a mean flute on “Come Up” which morphed into “Starship Trooper”. The screens behind the band showed amazing images all night long but at this time they showed off some classic Roger Dean artwork. When the song ended, he heard thundering applause and fans were standing.

“Roundabout” wasn’t the final encore and it was the most interesting rendition of the song that I’ve ever experienced.

“Soon” brought the house down as the show closed with the hit song off the Relayer album. Again, another song Jon always seems to enjoy.

Jon related so well to the audience. He was in great spirits and the band was having a great time.

Here are the remaining tour dates: