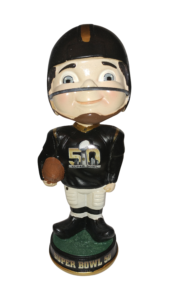 Last year was an exciting one for bobbleheads and the National Bobblehead HOF and Museum, and we anticipate that 2017 will be even better! We hosted our preview exhibit from January through April and are getting closer to being able to announce a permanent location. In addition, we created nearly 50 new bobbleheads. Teams gave away more bobbleheads than ever, and the level of creativity was through the roof.