Connor Kurth is a right wing who is in the midst of his second season with the Dubuque Fighting Saints. He scored 41 points in 52 games last season, and in 2021-22 his scoring has been elevated. His 27 points and 13 goals in 20 games will obliterate what he did previously. What’s his secret?

Kurth was passed over in the 2021 NHL Draft but seems on track to be selected in 2022. I’d say he’s poised to be a mid to late-round pick for a team that realizes his offensive upside is worth the wait. Kurth wants to be a top scorer.

“That is what I want this year,” said Kurth. “It’s tough shoes to fill, but I think I can get it done.”

At 5-11, 207, Kurth isn’t afraid to mix it up. He’s hard to stop when he wants to go to the net. He has decent speed already, and his shot is heavy. He had an eight-game point streak this season where he scored 13 during that time. 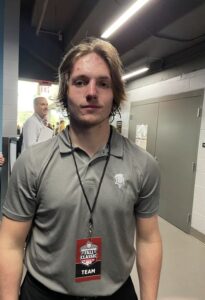 Kurth has impressive footwork around the crease area. It seems to come naturally, and it gives him the ability to shake defenders and fool goalies at the last minute. I noticed an improvement in his speed.

“I worked on my skating a lot this summer, “ Kurth divulged. “That was a big focus of mine this summer, and I appreciate the compliment. I focused on it a lot.”

When there’s a one-on-one battle along the wall, that’s when Kurth is very dangerous. He’s able to bowl over the opposition and get a prime scoring chance most times.

“Yes, for sure. All the “D” are tough in this league. You can’t just beat them with your stick skills, so you have to beat them with power plays and no risk plays.”

Like most offensive players, there comes a time where the 200-foot game has to be elevated to continue to move up the ladder. Kurth is pretty good in that area now because he has put in the time to improve in that area of his game. And that’s a good sign.

“II worked on that too this summer. I played in a lot of scrimmages and focused on defense. That was a big focus of mine. I was told to work on it, and I saw that myself. I worked on it this summer a lot.”

When I asked if he was hopeful these improvements would get him selected at the 2022 NHL Draft, he responded with, “I sure hope so. That’s the goal.”

If the NHL gets back to hosting the combine this year, you can count Kurth in, but he has to be invited.

“That would be cool to go to. I would be honored to go,” he said with some excitement in his voice.”

Kurth is a University of Minnesota commit, and some team would be lucky to get this guy in their organization.