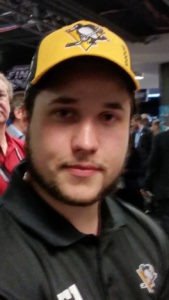 There are a lot of professions in this world that at the age of 22 a person wouldn’t be seen as less than what they are. Right now, Derrick Pouliot seems to be facing that. He just won a Stanley Cup, he’s been playing at the NHL level and yet many think he’s a bust.

“It’s exciting, this is every hockey players’ dream,” said Pouliot. “Even though I haven’t been in many games it’s still a great experience.”

So far he’s played 56 games in the NHL and two playoff games. That’s more than most ever get a chance to do. At this point people have to forget that he was drafted 8th overall in 2012 and look at the player he’s trying to become.

The Penguins may have over-hyped him in the “Shero” era but now they’re taking their time with him. At 6-0, 208, he plays a lot more defense, he’s a lot stronger, and he still gets some points. He may never light it up like he did with the Portland Winterhawks but that’s ok when you’re playing at the highest level.

“This is a little bit familiar but obviously this is a step up from that. More media. This is pretty crazy,” he added.

When the Penguins changed their defensive philosophy, it gave players like Pouliot a chance to play the style they were accustomed to in junior hockey just against bigger, stronger, faster players.

“Yeah, I think skating is one of my strengths. We are really fast and with the forwards we have and the defense that can really move the puck, and jump into the rush, that’s definitely part of my game too,” Pouliot said.

When a player is a “Black Ace” like Justin Abdelkader was for the Detroit Red Wings back in 2008 he was the same age and told me a similar story.

“Everybody can play. My first year it was staying consistent and this year I think I was better with that. Its tough when you’re playing so well. The coaches don’t want to change the lineup,” he divulged.

I’ve been through this before. Players have followed this path before. All I ask is you give him a chance. He hasn’t proven he can’t play at this level. What he has proven is that he’s not a #1 or #2 defenseman. He might be a 5 and if he is, so what?

Once player is chosen teams throw them into their prospect “pool” and they’re all equal and trying to accomplish the same goals. If he was chosen in the 5th round instead of 8th overall would that make him better?