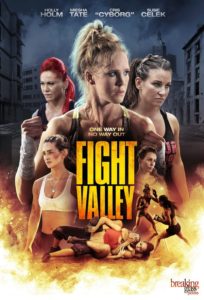 I’m not an adrenaline junkie but after seeing this movie I got that feeling for a short time. The movie “Fight Valley” features some of the best UFC talent with former Bantamweight Champ, Miesha Tate, another former Bantamweight champ, Holly Holm and UFC newcomer, Cris Cyborg. It’s a film about an underground fighting ring in Camden, New Jersey.

A fighter named Tory (Chelsea Durkalec), a knock around girl, dies and her sister Windsor (Susie Celek) gets involved in the business to avenge her sister’s death. But first she has to be trained by a reluctant gym owner and former fighter, Jabs (Miesha Tate), who had said previously she won’t train anybody. For this she made an exception and that’s where this movie picked up even more steam from the terrific early fight scenes provided by Holm and Tate and company.

Celek, does some amazing training that’s very Rocky-like. What Rocky did with meat she did with ice. To say that this movie cut corners on the stunts, actual fight scenes or workouts would be a disservice. The action is very realistic, gripping and gory at times.

The women is this movie are rugged. They’re fighting bare knuckles and I’m sure a few of them could kick Brad Pitt’s ass (fight club reference).

This just over 90 minute film is fast moving, it has some nudity, but not gratuitous, and the story is a good one. There are some nice unexpected moments.

Tate is a natural for this part and does a fantastic job. Holm was fine.

Writer/Director, Rob Hawk has a good one here. It opens July 22nd Nationwide (and on demand) and you should get out there and see it if you’re an MMA fan, boxing fan, or fan of a movie with some good old fashioned ass-kicking.