You are here
Home > Footballology > Fitzpatrick Needs To Deliver 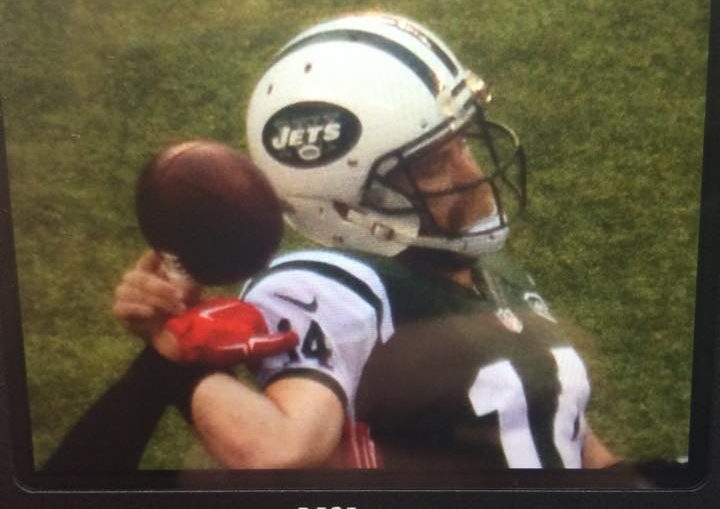 Count me as one of those folks that was indifferent about Ryan Fitzpatrick signing his one-year, $12-million contract with the Jets on Wednesday.

It’s great he’s back. It became old hearing about him waiting to get a market value deal.

For $12 million a year, he better lead the Jets to the playoffs next year. That’s not asking for too much, right?

He waited for months to get a fair deal to the point he missed OTAs. He did not even talk to his teammates. He was overweight. For all that trouble, he should make it worth it by playing well this year.

The Jets are a win-now team. Their best chance to be a playoff team is with Fitzpatrick. There’s a reason the Jets were patient with him agreeing to a deal. They could have told him they were done with him months ago.

Fitzpatrick couldn’t wait for a fair deal so long. He knew it, too. If Geno Smith had enough reps and took command of the offense for most of training camp and exhibition games, he would be the regular season starter. It wouldn’t be fair for Fitzpatrick to take his job after working hard all camp to be a starter.

So Jets and Fitzpatrick reached a compromise. The Jets gave him a one-year deal, but they sweetened the offer by giving him a $12 million deal.

Jets general manager Mike Maccagnan played this one right. He knew no team was going to offer Fitzpatrick the deal he seeked for. He did not have to put the Jets in a position to bid against themselves by overpaying their quarterback.

It was the right move to make. Fitzpatrick has not earned the right to be paid quarterback money. He is not even the future for the Jets. He may be the right guy right now, but he is not the answer long-term answer.

In fact, he will be hard-pressed to duplicate his career-high 31 touchdown season last season. There’s a reason he has been a journeyman quarterback in his overachieving career.

Only the Jets can make Fitzpatrick look like Joe Namath. They haven’t developed quarterbacks in a long time. Browning Nagle, Chad Pennington and Mark Sanchez never turned out to be a franchise quarterback to build around for a long time, and it’s hard to believe Smith will be that quarterback. They relied on journeymen quarterbacks (Vinny Testaverde) and quarterbacks past their prime (Brett Favre, Neil O’Donnell, Boomer Esasion) to be their savior with no successful results.

It’s no wonder the Jets haven’t won anything since 1969. It starts with the quarterback.

Fitzpatrick will try to be the guy that leads the Jets to a championship even if the odds are against him.

Honestly, the bar Is so low that if Fitzpatrick wins two playoff games for the Jets this year, it would be an accomplishment. He would be worshipped if he leads the Jets to the Super Bowl even if they fall short.

Fitzpatrick will get a chance to prove his worth this year. He agreed on a one-year deal with the idea that he would get his last payday next offseason if he duplicates last offseason.

If he truly thinks he is worth that money, he leads the Jets to the AFC Championship game this year.

It’s a challenge he happily accepts. He knows there’s pressure on him to come through after trying to squeeze every last money out of the Jets. He will be more than happy to bet on himself to get it done.

This is likely his last year with the Jets unless he leads them to the AFC title game. By then, the Jets are hoping Christian Hackenberg or Bryce Petty can hold command of the offense and be the team’s next hope at quarterback next year.

So much intrigue. So much questions to answer. Fitzpatrick never had to deal with being the center of attention like he is now.

He asked for it.

If he stinks it up, well he can collect his millions sitting on the bench while Smith desperately tries to hold on to his career.