You are here
Home > Footballology > Fitzpatrick Showed His Worth Against Buffalo 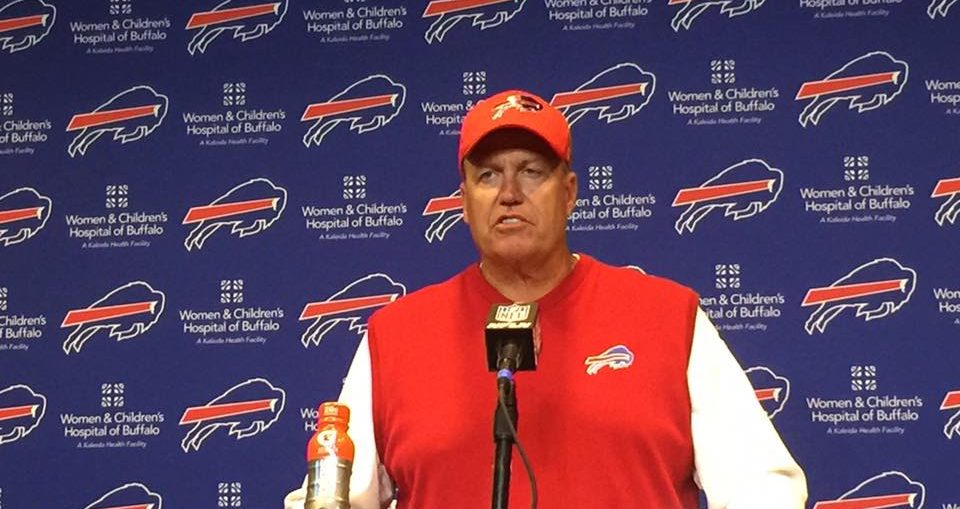 Last night showed why the Jets were willing to wait for Ryan Fitzpatrick to agree on a deal this offseason.

He engineered a great second half drive that would put Jets running back Matt Forte in a position to score a couple of touchdowns.  He had Brandon Marshall and Eric Decker involved on offense as well.

Fitzpatrick’s flawless play in that half is why the Jets celebrated a 37-31 victory against the Bills at New Era Field. He completed 24 of 34 passes for 374 yards and one touchdown to show for it.

His smarts, his calmness and his leadership were in full display in that game. The Jets needed every bit of it for them to earn a come-from-behind victory. He was worth every penny of his $12 million, one-year contract.

There was a sense that momentum was building for the Jets. Fitzpatrick was shredding the Bills secondary with ease. That was encouraging.

It was on the Jets defense to make stops. If they did that, Fitzpatrick would do his job.

When Bills quarterback Tyrod Taylor threw an interception to Jets cornerback Marcus Williams at the Jets’ 13, the tide changed for good for the Jets. This was their ballgame to lose with the way the Jets were operating their offense.

Fitzpatrick threw a deep ball to Eric Decker that moved the chains to the Bills’ 25, From there, he gave the ball to Forte. The Jets running back scored on a 12-yard run to give the visitors a 37-24 lead.

The Bills were deflated. Their fans were booing. The Jets knew this game was theirs.

Fitzpatrick did a great job of utilizing the running game and then throwing deep when he needed to at third downs. That was the key to his success.

Forte is a running back that can get yardage and slow down the clock. He is a difference maker, and he still has it. He will do things that Chris Ivory and Bilal Powell couldn’t do last year like catching the ball and running for big yardage.

Fitzpatrick has to keep using Forte, which is something he did not do in the second half of the Jets’ 23-22 loss to the Bengals in Week 1.

With a good running game, this makes Fitzpatrick’s job easier.

Fitzpatrick did a great job of adjusting in the second half after throwing the ball too often in the first half.

This is where his intelligence shined in the second half.

A mark of a good quarterback is being calm when the going gets tough. It’s about surviving under adversity. That has always been Fitzpatrick’s strength going back to last year with the Jets. It’s why his receivers and his teammates have the utmost respect for him. It’s why they go all out for him.

Fitzpatrick wasn’t going to dwell on his bad first half. He was about finding a way to get it done, and he did that by finally figuring out the Bills secondary that has given him fits over the years.

He kept grinding it out, and everything came together for him late in the third quarter.

This is what Fitzpatrick is. A quarterback that will give you everything he has on gameday. A player that is resilient.

No one will confuse him with Tom Brady or Aaron Rodgers or Ben Roethlisberger, but he is an efficient quarterback that has toughness in him. That says something about him. There’s a reason why he is still in the league.

Fitzpatrick’s teammates respect him for a reason. They know he will get them involved. They trust him when it comes to getting them involved. He has a way of connecting with his receivers.

That’s why Brandon Marshall likes working with Fitzpatrick. He knows he will get the ball. He knows there’s a trust factor.

Despite Marshall and Eric Decker struggling in the first half. Fitzpatrick kept his faith in them by continuing to throw to them. It worked out for all three of them in the second half.

That’s called leadership to get players engaged despite their struggles and having faith in them. It’s an important ingredient of being a quarterback besides just throwing the football and score touchdowns.

Fitzpatrick has the intangibles to help him be a survivor in this league.

It’s why he is good enough to start as the Jets quarterback.

It’s why they believe in him.