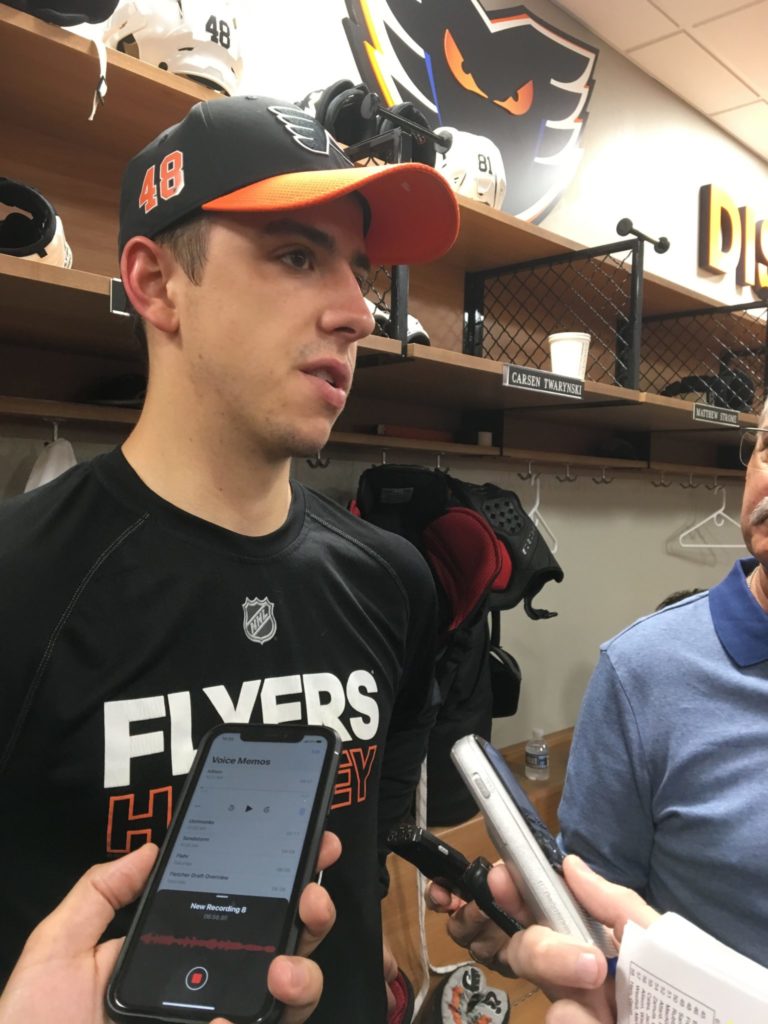 For the first time in over half a decade, the Philadelphia Flyers concluded their prospect development with a full five on five scrimmage. While the team had completed a three on three half ice tourney the previous day, it gave some idea of how some prospects would look in tight quarters, but to gain a better idea of what players were capable ice, a full sheet of ice would provide a truer picture (even if contact was limited to stick checks and board pinning. The scrimmage was played as a two-period game with 30-minute running clocks in each period until the final three minutes when the clock operated as normal. Bobby Brink scored the game-winner with just over 7 ½ minutes to play to give Team Orange a 3-2 win over Team White.

Camp invitee Will Mackinnon gave Team White a 1-0 lead with just over four minutes in the first period, and Matthew Strome responded for Team Orange with just over two minutes left in the period to tie the score at the intermission.

Team White regained the lead a little less than 10 minutes into the second period when Jackson Cates converted a feed from his brother Noah following a neutral zone turnover, giving them a 2-1 lead.

Team Orange rallied when Isaac Ratcliffe tying the score with just under 6 ½ minutes into the second period before Brink would get the game-winning goal off a brilliant cross-ice feed from Morgan Frost.

Following the game, the teams engaged in a dual shootout (with both teams shooting on the opposing goalie at the same time). Team Orange won that, as well with goals from Mason Millman, Ben McCartney, Bryce Brodzinski, Matthew Strome, Maxim Sushko and Frost, while Team White goal scorers were Pascal Laberge, Jackson Cates, Carsen Twarynski, David Kase and Joel Farabee.

Morgan Frost (pictured above): Likely the best player in development camp, Frost had an impressive cross-ice feed on Brink’s game-winner and beat Kirill Usitimenko with an adventurous move to open him up in the shootout.  His edgework & stickhandling plays mind games on the other prospects. A subtle cut & he’s through opposing defensemen like a whisper.

German Rubtsov: Looked like a man among boys, especially during the first period. Really strong attacking the offensive zone, disruptive in the neutral zone with a couple of intercepts and a break in on goal that he shot wide on.

Cam York: While the defensemen certainly have had the green light to go, York’s offensive instinct has been notable. Several astute pinches & quick release on his wrist shot. His speed was much more noticeable in a full ice contest than during drills or even three on three half ice. Processed and correctly diagnosed in the defensive zone as well.

Yegor Zamula: Last year’s rookie camp revelation, Zamula continues to show a low panic point in handling his defensive coverages, and stayed pretty cool under pressure wheeling from behind his net as Bobby Brink was harrying him on the forecheck

Bobby Brink: Did not look out of place on a line with Frost and Ratcliffe. Tenacious on the forecheck. Occasionally struggled tracking play in the neutral zone (through some stiff skating), but showed a keen sense of where the puck would be, as evidenced from his game-winning goal, scored on the backhand.

Ronnie Attard: Pretty instinctual work defensively and knew when to jump into the play. Said he felt pretty confident doing that knowing he had a good defensive partner in Wyatt Kalynuk.

Noah Cates: Strong two-way work and seemed to have a little extra pep in his skating working on a line with his brother Jackson, whose goal he assisted on.

Joel Farabee: More subtle, quietly efficient work, showed good chemistry with Rubtsov. More of a neutral zone game and offensively he seemed to be focused more on playmaking that shooting.

Bryce Brodzinski: Like Farabee, seemed to get more comfortable as the game wore on, tracked play well and showed a willingness to engage and get to the dirty areas of the ice (along the boards and screening in front of the goalie.)