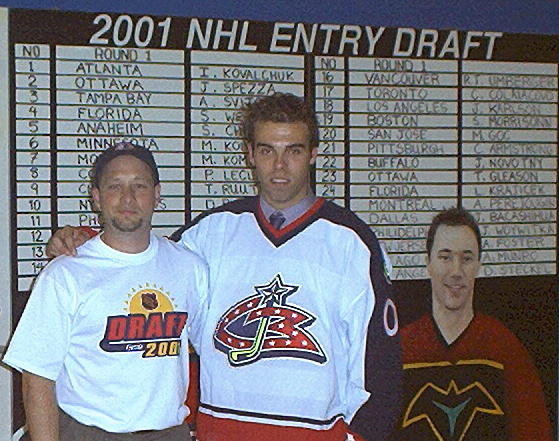 If Bob McKenzie is correct, and he usually is, and Jason Spezza is going to play for his hometown Leafs, my mind instantly goes back to the 2001 NHL Entry Draft. It was my first. Somewhere I have pictures of Spezza at the clinic with kids. I shot that on my 1-megapixel camera. So maybe it’s better you don’t see them. Anyway, I remember it like it was yesterday.

Ilya Kovalchuk was the presumptive #1 but I liked Spezza. I knew a bit more about him and I was hoping for some draft drama, but there wasn’t any, the Atlanta Thrashers got their first piece of what would be an eventual Stanley Cup team, well it did veer left of that, but it was an exciting moment when they announced the first overall pick.

Spezza was talked about in glowing terms by the experts. 915 points in 1,065 games, so far, is a really successful career. Not Hall of Fame worthy, but very solid.

He has 70 points in 80 postseason games. Again, solid numbers. He’s been a solid citizen in the league, to teammates, and to the sport. He’s flirted with the Stanley Cup and now with the Leafs, he will get one more kick at the (can) Cup.

At 36, he’s well past his prime years in the NHL. It always seems the Rangers and Leafs ended up with these kinds of players on the back nine of their careers. I thought the Leafs were past this, but they’re not. I feel like Kyle Dubas is placating Mike Babcock with this move. But he’s making it and I can’t say it will be a resounding success.

I know it’s one year; it can’t hurt the team; I hear that with every one of these kinds of signings. He hasn’t broken the 30-point mark in the past two seasons.

Sure, he can be effective on PP2 and he will win face-offs, 58.2% close to the top in the NHL last season. He scores some goals at even strength and that can help too. I’m not saying he won’t help; I’m just saying they probably could have done something else. Ottawa is loaded with younger centers, I guess they didn’t want any of them in the Nikita Zaitsev trade. Logan Brown and Filip Chlapik come to mind and I get they aren’t plug and play but what if they are ready?

That’s my two cents. Let’s see what happens. No matter what, I’ll say Spezza has had a very good career and that’s the bigger message here.