You are here
Home > Hockeyology > Flyers vs. Rangers Prospect Notes

Morgan Frost – Frost good offensive zone entries. He showed a solid all-around game without many great offensive chances. Still, you don’t want him to play in the NHL and have to deal with being scoreless for long stretches. That doesn’t help a young player develop.

Joel Farabee – He’s a bit snake-bitten for goals like Frost. AV is looking for results. He said he will make moves that benefit the team. If Farabee can’t breakthrough in preseason he’s probably not going to stay all season. Both he and Frost might get the nine-game look and if neither breaks through it’s best to send them to the AHL where they can play in all situations and score and continue to gain confidence. 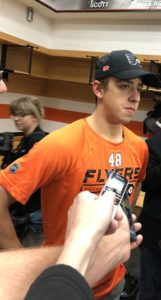 Carsen Twarynski – He was fast, strong, strong at both ends of the ice. He took a huge step forward in winning a job but has to continue this momentum into the next few games.

Igor Shesterkin – He was seeing well in traffic. He made glove saves with confidence. He faced 40 shots. A few bad giveaways right to former Ranger, Kevin Hayes. He made some great saves considering their defense was brutal for most of the game.

Matthew Robertson – He was skating well. He showed decent speed and good defensive awareness. I liked his physical play too. He will get sent back to junior hockey and continue to develop.

Lias Andersson – He is finally playing his game at the NHL level. Tough defensively, physical and showing tricky offensive moves. What a difference a year has made for this developing prospect.