The very long National Football League season is now over.  Now we all look ahead to “the ultimate game.”  Hype, hoopla, histrionics and sometimes a great game is the result of all the activity. 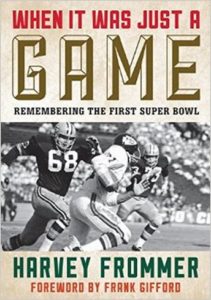 Played in the dead of winter in the United States across various time zones, the “Super Bowl” on “Super Sunday” has become a de facto American holiday, right up there with Christmas, New Year’s Eve, Thanksgiving and the Fourth of July. For many, better.

How it all came to be is in many ways more fascinating than whatit has become.   The merger of the American Football League and the National Football League led to the need for a championship game. The first contest was played on January 15, 1967 The Vince Lombardi Green Bay Packers squared off against the Kansas City Chiefs.
And, although the contest was officially known as the AFL-NFL World Championship, its unofficial name – the Super Bowl – was used in the media, the fans and the players, and the name stuck.
One theory for how the high flying name came about is that at an owner’s meeting centered on what to call the game, owner Lamar Hunt had a “super ball” in his pocket that he had taken away from his youngster earlier in the day. Hunt  was not too taken with the long and ordinary sounding suggestions for what would become professional football’s ultimate game.
As the story goes, squeezing the ball, he suggested the name “Super Bowl.” His suggestion was not greeted with much enthusiasm by the assembled group. Nevertheless, he mentioned the name to a reporter who loved it and, as they say, the rest is history.
That first game witnessed the first dual-network, color-coverage simulcast of a sports event in history, and attracted the largest viewership to ever see a sporting event up to that time. The Nielsen rating indicated that 73 million fans watched all or part of the game on one of the two networks, CBS or NBC.
In actuality, the game was a contest between the two leagues and the two networks. CBS’ allegiance was to the NFL. NBC’s loyalty was to the AFL – a league it had virtually created with its network dollars.
From the start there were special features to the Super Bowl including its designation with a Roman numeral rather than by a year – a move on the part of NFL Commissioner Pete Rozelle to give the contest a sense of class.
That first Super Bowl was played at the Memorial Coliseum in Los Angeles before 61,946. Quarterback Bart Starr was the first Most Valuable Player as he led the Packers to a 35-10 victory over Kansas City. Starr completed 16-of-23 passes for 250 yards and three touchdowns.
Max McGee of the Packers became an interesting footnote to Super Bowl history.
“I knew I wouldn’t play unless (Boyd) Dowler got hurt,” he said in later years.
So McGee went out on the town the days (and nights) prior to the game. Curfews, it seems, were there for him to break. He stayed out until 7:30 a.m. on the day of the game. Then, the unimaginable happened. Dowler suffered a separated shoulder throwing a block on the opening series.
In came the 11-year veteran McGee who had caught only four passes all season. He snared 7 passes for 138 yards. McGee and Starr hooked up in the first quarter for a 37-yard score, and again at the end of the third quarter for a 13-yard touchdown. Elijah Pitts ran for two other scores. The Chiefs’ 10 points came in the second quarter, their only touchdown on a 7-yard pass from Len Dawson to Curtis McClinton.

But Max McGee stole the show and set a pattern in that first Super Bowl that would be part of the ultimate game’s history of unlikely heroes, strange twists of fate, footballs taking a wrong bounce for some teams and the right bounce for others.

Who knows what history holds in store for 2017’s Super Bowl?

Dr. Harvey Frommer is a noted oral historian and sports journalist, the author of 43 sports books including the classics: best-selling New York City Baseball, 1947-1957,g “Shoeless Joe and Ragtime Baseball. He also authored the acclaimed Remembering Yankee Stadium and best-selling Remembering Fenway Park. His “The Ultimate Yankee book” will be to be published fall 2017.

Autographed copies of When It Was Just A Game: Remembering the First Super Bowl are available from the author.