The next list will get bumped out to 45 players. 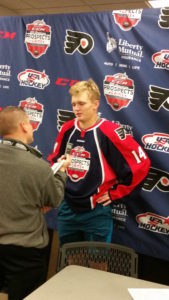 Casey Mittelstadt at the All American Prospects Game.