He was born in East St. Louis, Illinois on July 31, 1922. Like Yogi Berra, his education only lasted through the eighth grade. The tough and gritty Bauer was a Marine in the Second World War and saw action in the battle of Okinawa. 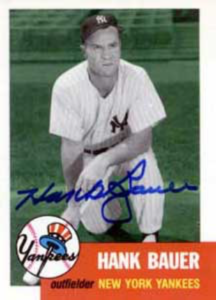 “We went in with 64,” he recalled, “and six of us came out.” He won quite a few battle stars for his combat in the Pacific.

Signing with the Yankees after the war, the rugged Bauer climbed up the minor league rungs. In late 1948, he was promoted from Kansas City. He was 26, old for a rookie.

Busting it in one game in the outfield which was his way, he took notice of centerfielder Joe DiMaggio glaring at him in a not too friendly manner.

“Did I do something wrong?” a puzzled Bauer asked.

“No, you didn’t do anything wrong,” DiMaggio responded. “But you’re the first son of a bitch who ever invaded my territory.”

Casey Stengel often platooned him in the outfield. “I didn’t like it,” Bauer said. “But there wasn’t much I could do about it. He was the boss. Later on in my career I finally realized he probably prolonged my career a couple of years.”

“He had that rough, grumbled talk, but was a real nice guy,” Bauer’s old teammate Irv Noren recalled. “He was a tough guy who got a lot of respect – no one wanted to fight him not even Billy Martin.”

A solid hitter with the power, Bauer collected 8 first-inning leadoff career home runs. Playing on nine pennant winners for the Yankees from 1949 thru 1959, his favorite expression was: “Don’t mess with money!” When he saw a teammate he though was not putting out as much effort as though was required, Bauer used that phrase as a wakeup call.

A Yankee for 1,406 games spread over a dozen seasons, a three-time All-Star, and one of Casey Stengel’s favorites, Bauer didn’t make mental mistakes and became testy when his teammates did.

The Yankee time for Hank Bauer ended in 1960 when he was shipped off to Kansas City in a big trade that brought Roger Maris to the Yankees. It ended a Yankee career that spanned the the end of the DiMaggio era through the rise of Mickey Mantle.

Dependable, selfless, honed in, were just a few of the ways he was described. Famed cartoonist Willard Mullin chose Henry Albert Bauer, who had a rugged handsomeness, as the model for the prototypical Yankee.

Oddly enough, Hank Bauer does not have a plaque in Monument Park.

His ULTIMATE YANKEE BOOK can be ordered from AMAZON: http://www.frommerbooks.com/ultimate-yankees.html.