Finnish left wing Roni Hirvonen (59th overall pick by Toronto in 2020) scored the game-winning goal on a last-minute wraparound goal that propelled his team past Team Sweden 3-2. Most likely they’ll play Team USA next, but you never know what might happen in this tournament.

Hirvonen has six points in five games and is among the top scorers on his team. He’s been important but no forward has been as important as his linemate, Anton Lundell who scored the first goal of the game for Finland that tied the game at the time. That was his fifth goal of the tournament, and he’s kept his hot goal-scoring touch going since arriving to Edmonton. He started off the season hot for HIFK as well. On face-offs, he was 50% which is low for him in this tournament. But he faces every top-line center, so it’s a hard job.

“We had good pressure until the last minute, we had a chance just before that, and I just continued that pressure and there was a scramble at the net, and it went in, and it was great,” said Hirvonen (left, Brad Lambert right). 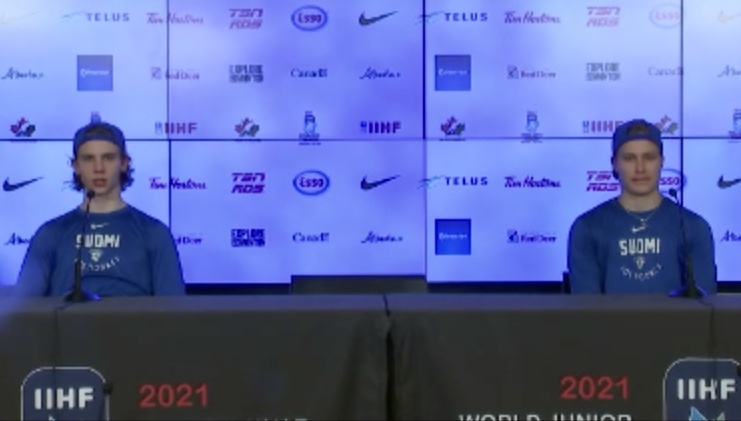 Sweden isn’t happy, that’s a given. They got outplayed from the middle of the second period until the end of the game. Sweden always believed they could win this game. They felt it was going to go into overtime, and they would win it.

“The feeling was we would grow from the Russia game. The result isn’t what we want,” said Team Sweden coach, Joel Ronnmark.

Finland will be a hard team to play now. They seem to be playing their game, with solid defense, active sticks from the entire team, and timely saves from Kari Piiroinen. He’s quietly become one of the best goalies in the tournament, and he’s eligible for the 2021 NHL Draft. He’s playing some great hockey at a time when scouts are completely tuned in to this tournament and how that can affect a players’ draft stock.

Defenseman Ville Heinola (Winnipeg) has been dynamic. His skating is terrific, and he’s been able to hold the puck even under pressure. He’s a vital part of the team, and Jets fans have to be pleased to see his development, he will get a second shot at the NHL very soon.