Jen Lilley is an actress who has been working and promoting her work and charitable contributions tirelessly during the pandemic. She recently signed a four-picture deal with GAC Family.

“GAC family is a new network with more feel-good content. Romantic comedies and happy endings,” Lilley stated. “I think everyone loves a classic romantic comedy. It’s not a pure comedy but it’s feel-good, Tom Hanks meets Megan Ryan-Esque romantic comedies. Those are my favorite, and I think people look for those.”

Having interviewed her before we started talking about what we’ve been watching on television. That’s what we do during a pandemic. Turns out Dexter is her favorite show.

“It’s my favorite show of all time. I just watched the final show. I need therapy. We love Dexter. I love dark comedy. Serious academy award-winning type shows. I think there’s been a consensus globally, with the pandemic seemingly going on and on, people don’t really want to watch stressful television right now,” said Lilley. “Everybody wants a stress-free predictable escape. That’s one of the things that networks like GAC Family provide.” 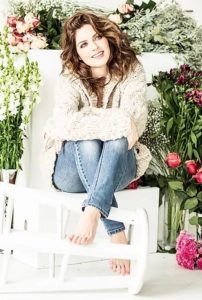 Stable work is important for actors and actresses. Lilley appreciates that.

“I was thrilled. I have a long-standing relationship with Bill Abbott who is the CEO. I really love Bill as a person. I think he’s full of integrity, and he does so much amazing charity work behind the scenes. For me especially being pregnant. I’m due in May. I’m building my own football team over here,” she laughed. “It was incredible timing to know I will have consistent work over the next two years. I’m really thrilled on multiple levels.”

This opened up a new line of questioning. If I were in charge of her deal. What would these movies be about?

How about a cheerleading coach? Either a good one or a bad one? She responded, “I think the bad cheerleading coach would be a Lifetime movie (laughter ensued). The good one is interesting. It would matter how you weave the storyline. Will she fall in love with the football coach?”

How about a singer. Set in the 60s? (https://www.sportsology.com/jen-lilley-has-a-new-album-that-takes-me-back/). She immediately said, “I would love to play a singer in a movie. It would be incredible. I’m still hoping that happens one day.”

When I asked about being a science teacher, she yelled, “I love science! I would love to play that part. I would like to be an inquisitive science professor uncovering new theories. That would be incredible (laughs). We’ll see.”

As a fan of the Washington Football Club, Lilley has now been asked multiple times by me, how she feels about the new name change. It’s crazy to me that this is a thing.

“They are so hard to keep up with. I guess they’re just trying to keep up with Covid. Delta, Omicron (laughs). Like the new variants go with a new name,” Lilley said like a true fan.

Lilley travels and quarantines to make her movies. She does her best to stay safe.

“It’s impossible to protect yourself fully. You can do all the right things and still get Covid. It’s frustrating. You just have to try and make the best choices and take a lot of vitamins. Vitamin D is the most important that people have found for trying to combat Covid. D3,” Lilley advised.

We all have our remedies. I gargle with Listerine nightly. It’s supposed to help.

Jen Lilley on Foster Parenting, Her Career, and More