Marco Rossi is an unusual player in the upcoming NHL Draft, which will be held virtually on October 6th and 7th. His name will be called early on the 6th, that’s something we all know. Where he falls in the Top 5 or Top 10 is the interesting part.

Without an NHL Combine, I was eager to talk to Rossi. I’ve been impressed with his motor, he never gives up on a play, he just keeps working, and I asked him where he got that from?

“I think it was when I was really young my dad taught me to play hockey,” he recalled. “My dad always told me to have my head up and be a good playmaker and try and give good passes. And that was different than other parents.

“When you’re really young the other parents would say to their kids, ‘try and score and we’ll go to a restaurant or something’, something like that and they tried to score every time. Dad would say have your head up and feed your teammates and be a good teammate. I think that’s why I’m that good in the offensive zone.” 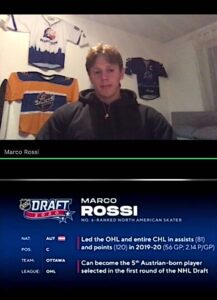 Rossi led the CHL in scoring with 120 points. The Austrian takes pride in his offense but talks about his two-way game as well. He just turned 19 so it will be interesting to see if he gets an NHL look or goes back to the Ottawa 67s when the OHL starts back up. He and his teammate Jack Quinn will both hear their names called early in the first round.

“Jack is a really good teammate and we really push each other on and off the ice.”

I write for Elite Prospects and he’s ranked 4th there. I took part in that vote but on my own rankings, I have him ranked 8th. If you’re within five slots, that’s an acceptable difference to me. For sure, some lucky team will be getting a heck of a player.

I had a chance to view him live at the Top Prospects Game over the winter. He had a terrific game; I noticed his vision on his passing and his quickness up the ice.

“Lots of similarities between Marco Rossi and Brayden Point. He’s not afraid to get his nose dirty, uses his small frame well to win battles, attacks the middle of the ice,” said Rachel Doerrie, Elite Prospects scout. “He’s well rounded offensively, uses his hands to make quick plays in traffic, and will be an effective offensive weapon at NHL level. The ceiling is 1C, but is more likely a LW or 2C.”

Rossi is one of the most interesting players in this draft. He will be an instant fan favorite to the franchise that calls his name. Rossi is the kind of player a franchise might trade up for to get. We’ll soon see how all of this is going to play out and it will be very interesting, you can mark my words.

Check out my new hockey book Sticks and Stones here.