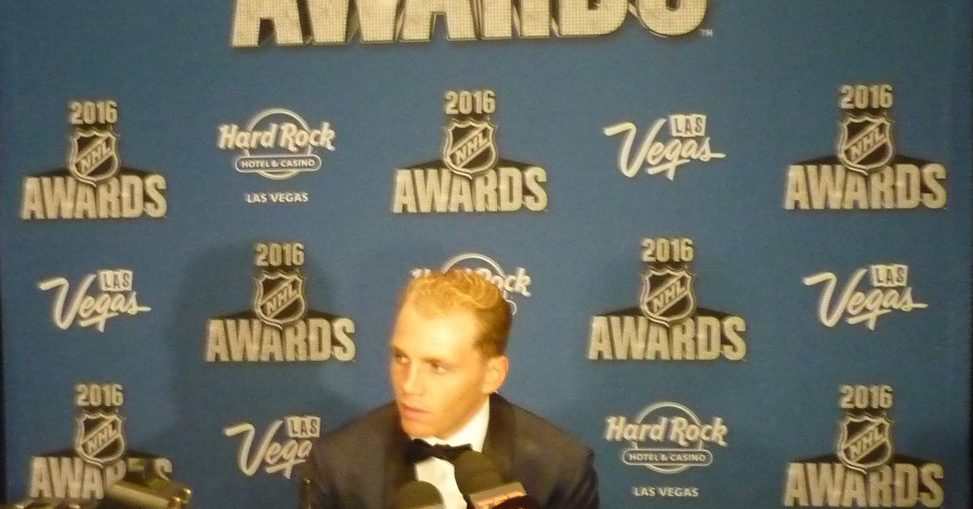 “We think this is a tremendously exciting opportunity not only for Las Vegas but for the league as well…The process began just two days short of a year ago…With Nevada youth hockey registration up 37% in the past decade…I’m not sure that it’s a stretch to have draft worthy players hail from here.”

At almost 2PM Pacific Time yesterday afternoon, Commissioner Gary Bettman followed the Vegas news with the deferment of Quebec City’s expansion proposal. The three issues that slowed down a pro hockey return to French Canada are the recent fluctuation of the Canadian dollar, already having 16 teams in the Eastern Conference, and concerns about the NHL Expansion Draft. Mr. Bettman didn’t expound on these concerns, which I assume are related to team losing multiple players to expansion. Many fans hoping for the New Nordiques took to Twitter with anger and frustration over being passed over yet again.“There is no doubt as to the passion for hockey in Quebec City…There is no doubt as to the suitability of the Videotron Centre as a home arena for a team…These components in the control of the Quebec City applicant are first rate…The decision to defer, however, was based on elements over which Quebec City group had no control whatsoever.”
And if you forgot somehow, the NHL Awards were also in Las Vegas yesterday at the Hard Rock with Maple Leafs fan and actor Will Arnett as this year’s host. Conn Smythe winner Sydney Crosby brought the Stanley Cup into The Joint concert venue, and everyone in the house left with a great appreciation for Gordie Howe who was remembered after passing away on June 10th. One thing I hadn’t heard before was all cheers for Gary Bettman as he was introduced on-stage, a likely by-product of the new Las Vegas team. Award highlights include:
JACK ADAMS AWARDDespite an amazing turn-around by the South Florida franchise with Gerard Gallant at the helm, it’s hard to beat winning the President’s Trophy. Barry Trotz took home the top coach award last night by leading the Capitals to a 56-18-8 record. 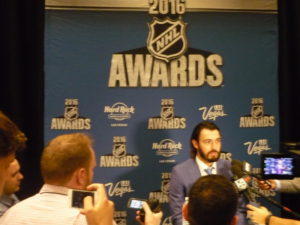 JAMES NORRIS MEMORIAL TROPHYOttawa’s Erik Karlsson was searching for his third trophy as the league’s top blue-liner, scoring 82 points this past season- the most for a D-man since the Rangers Brian Leetch 20 years ago! But Drew Doughty from the Kings was a 1st time winner in a tight voting race, probably making a big impression with his steady play over the years. All Star Brent Burns from San Jose was a finalist for this trophy as well as the Stanley Cup. His reaction to finishing second best was short and sweet:“It’s done…you put eveything you got into it…you can’t change it.”
LADY BYNG MEMORIAL & FRANK J. SELKE TROPHIES
I thought Boston’s Patrice Bergeron was going to follow in the footsteps of Norris winner Doughty, as he’s been such a consistent two-way playmaker over much of his career. Not only did the Kings Anze Kopitar edge out Bergeron in the closest vote of the night, but also was named the most gentlemanly in the league with only 16 penalty minutes and a plus 34 rating. On media day I asked the Selke runner-up on his future goals. Bergeron answered humbly.“Winning another Stanley Cup…that’s always the ultimate goal.” 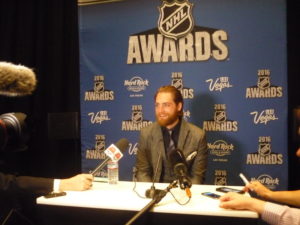 VEZINA TROPHY
Even though Tampa Bay’s Ben Bishop lead the league in Goals Against Average and Save Percentage, Washington’s Braden Holtby won the award as the media darling for most of the season. But his 48 wins, tying him with Martin Brodeur for most wins in a season, was remarkable- even more so playing in 12 less games than the great Devils goaltender. 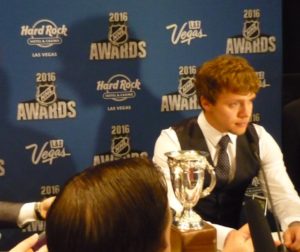 CALDER MEMORIAL TROPHYEdmonton fans rallied behind their standout rookie Connor McDavid, but the overwhelming favorite was Artemi Panarin of Chicago. A transplant from the Russian KHL, the 24 year old placed ninth in the league with 77 points. I asked him through his translator how many times and when was the last time he was in Las Vegas, along with his favorite food.
“One time last year for a rookie dinner. He likes all sorts of food, but his favorite is traditional Russian home cooking.”
HART MEMORIAL TROPHY
Patrick Kane ended a 38 year drought for the Chicago Blackhawks for the Awards biggest honor, notching career highs in goals and assists. The Buffalo native is the first ever U.S. born and raised hockey player to win the scoring title and league MVP. Kaner scored a hat trick Wednesday night, winning the Ted Lindsey Award voted on by the players and the Art Ross for leading the league in scoring.
“You look at the list of players who have won the (Hart) award- it’s pretty humbling…there’s just so many great American players who’ve played the game it’s just surprising I was the first to win the scoring title…Being an American kid and growing up with names like Modano, Chelios, Roenick.”The 27 year old won the MVP award on ironically his 9th anniversary of being drafted into the league. Follow Russ Cohen and Sportsology starting later today in Buffalo for coverage of the 2016 NHL Draft.
Jonathan West is a Chicago based columnist and broadcaster. Twitter: @JonathanSWest
Instagram: @jonnyphotobomb