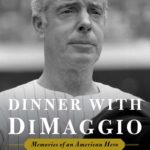 All kinds of new sports books. All kinds of interesting reading. What follows if the pick of the pack. Enjoy

Dinner with DiMaggio by Richard Sandomir (Hatchette Books,   $26.00, 350 pages) is a bit overblown and repetitive which more careful editing would have fixed. There is also data on the Yankee Clipper that has appeared in print before. That being said, if you are of a certain age, this tome will appeal to you. Filled with gossip, opinion, stories, it worth spending a few hours with. A GOOD  READ

Coach Wooden and Me by Kareem Abdul-Jabbar focuses in on his half century friendship with the fabled UCLA basketball coach. They first met in 1965 when Jabbar, then 18-year-old Lew Alcindor, showed up at UCLA. The rest, as they say is the stuff of legend in basketball history as Jabbar led the way for the Bruins to cop three NCAA national championships.

This is a book to read and savor and keep on your sports bookshelf. It truly is an inside look at two legends and their special relationship. Wooden was coach, mentor, friend, critic, father, all things to Jabbar who was a player and person who helped shape the legacy of his great coach. HIGHLY RECOMMENDED

The Pride of the Yankees by Richard Sandomir (Hatchette Books, $27.00, 293 pages is the inside and sometimes never told story of the making of the classic film about Lou Gehrig, Gary Cooper and so much more. Through the years I have gone back and forth as to which sports film ranks Number One.

I have always come back to The Pride of the Yankees. This terrific tome is filled with anecdotes galore, new information, elegant writing that matches Sandomir’s prodigious research. ONE THAT BELONGS HIGH ON YOUR SPORTS BOOKSHELF

About the Author:   One of the most prolific and respected sports journalists and oral historians in the United States, author of the autobiographies of legends Nolan Ryan, Tony Dorsett, and Red Holzman, Dr. Harvey Frommer is an expert on the New York Yankees and has arguably written more books, articles and reviews on the New York Yankees than anyone.   In 2010, he was selected by the City of New York as an historical consultant for the re-imagined old Yankee Stadium site, Heritage Field. A professor for more than two decades in the MALS program at Dartmouth College, Frommer was dubbed “Dartmouth’s Mr. Baseball” by their alumni magazine.

His The Ultimate Yankee Book will be published fall 2017.

Article is Copyright © 2017 by Harvey Frommer.  All rights reserved worldwide.