Quinn Hughes is in the midst of his rookie season and first NHL Playoff run. In his first three playoff games, he has a cool four assists. He had two big points in a 3-0 win in Game 4. With his team up 2-1, he’s not getting carried away.

“It feels great. It’s a big win. We really needed that. I think we capitalized well and it’s a big game tomorrow,” Hughes said.

The Calder Finalist is averaging over 22 minutes a game. He’s leading his team in scoring and he’s tied with Olli Maatta (Chicago) at the top of the scoring list for playoff defenseman.

It’s very difficult for a rookie to be a top-pairing defenseman and the power-play quarterback. That’s a lot of responsibility and defensively he has to cover the other team’s best players 99% of the time.

“I don’t think you can put a price on the experience and it’s big for the young guys here,” Hughes stated. “I’m leaning on the vets and I’m trying to stay levelheaded.”

When the third period comes, he doesn’t shrink, he elevates his game. 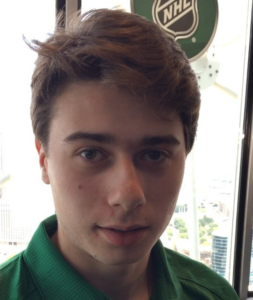 “It’s a 60-minute game. The third period is when teams really push it,” Hughes noted. “I don’t think a one-goal lead is safe, so you try and get one and not to give one up. We played a full 60-minutes today.”

Hughes is just getting started. I thought he was a generational talent a few years before the draft and so far, he’s heading down that highway. He will continue to get better so this year, no matter how far the Canucks go, these playoff games will help springboard Hughes to another level and that’s scary but that’s also what’s going to happen. Sit back and enjoy watching him, even if you’re not a Canucks fan you will be a fan of this player, I guarantee it.

Check out my new hockey book Sticks and Stones here. We feature Hughes in the book!: