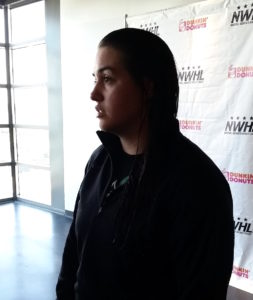 Buffalo, NY – Here are some scouting notes from the NWHL Free Agent Camp I attended. Needless to say I was impressed with many of these hopefuls.
The video below shows some quick action.
https://www.facebook.com/russ.cohen/videos/10154381809756495/
Morgan Scoyne – Played at RIT 2015 – She’s a defenseman who can make the long pass. She has really good puck skills. She has excellent speed with the puck. She will block shots. She’s calm with the puck and made good, safe decisions.
Kayla Parsons – Defense – Norwich University 2015-16 – She has exceptional speed. She has good fast clears. Excellent shot. She was the best defenseman there IMHO. She looked like a veteran out there.
Sandra Velasquez – Winger – Check out the article:
http://www.sportsology.com/velasquez-turned-some-heads-at-the-nwhl-free-agent-camp-in-buffalo/
Hayley Williams – Forward – Miami University 2015 – May have been the fastest player in camp but while she looked great dekeing and getting up the ice she got the puck stripped a bit too easily. She digs in the corners for pucks. Good forecheck. Took a nice angle shot that gave the goalie issues.
Allie LaCombe – Forward – Syracuse 2015 – Really got up the ice, with the puck, with ease. One of the faster forwards there.
Ashley Vesci – Forward  – Robert Morris University 2016 – Had the look of a sniper. She had a few top shelf shots. One went for the corner but just caught the post. She is hard to defend.
Kelsey Neumann – Suny Plattsburgh 2013 – Goalie – She has a great glove hand. Good positioning and very fast post to post.
Shyler Sietta – Goalie – Minnesota 2015 – She really lays out to make the very athletic saves. Thinks ahead of the shooter. Made shooters miss because of excellent positioning. She stays in the splits most of the time and that throws shooters off. Best goalie in camp.
Jacquie Greco – Defenseman – Syracuse 2013 – Seems like more of the good two-way type. She forechecks really well. She made a slick drop pass to set up a scoring play. Hard to do with players you barely know.
*Kayla Parsons, pictured above is from Fairbanks, Alaska.