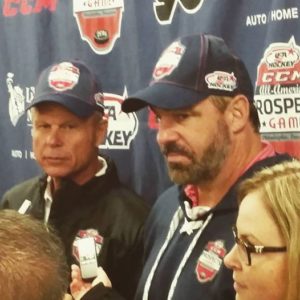 Philadelphia – – Two of Philadelphia’s most prominent hockey figures came back to the ice at the Wells Fargo Center last night. Instead of gearing up in their usual hockey garb, John LeClair and Mark Howe were dressed in suits as coaches behind the bench. The two were given the task of coaching some of America’s best young hockey talent.

The All-American Prospects Game isn’t the biggest stage for US hockey players, however, it is a good stepping stone to see where they might project down the road leading up to the draft in 2017. Last year’s event saw the likes of Keifer Bellows, Clayton Keller, Alex Debrincat, Charlie McAvoy, and Matthew Tkachuk. This year’s crop of prospects is no slouch either.

Team LeClair and Team Howe combined for a total of 10 goals during the spirited contest that showcased some terrific talent, speed, and skill. Here are some of the players that stood out for me during the game:

He already has a superb hockey name, but I digress. Mismash showed he isn’t afraid to spearhead the play and crash the net. He tallied a goal in the game for Team LeClair. He had a knack of knowing where to be at the right times as the play developed.

With the exception of goalies, there aren’t many “big” guys out on the ice. Martin stands slightly above average, but he packs a lot of punch into his frame. Sound positionally on the backend, Martin uses his smooth transitions and fluid skating to be around the puck at all times. He utilized his body quite frequently to move players from the front of the net so his goalie could get better angles. He was more defensive-minded during the game, but there can be splashes of offensive potential here and there.

McManus was all over the place last night. It seems more smaller players are finding their way into the NHL. In tight spaces, McManus thrives with excellent stickwork and maneuverability. He’s an elusive player that had a goal and an assist last night. His shot release is lightning quick and shot power was arguably the strongest I saw during the game. Whenever he was out on the ice, it seemed you could always pick him out through a flurry of activity for making plays and creating chances.

There’s no denying Yamamoto is tiny, but he plays anything but and constantly went to the dirty areas of the ice for scoring chances. His first few strides look as if is shot out of a cannon and his low center of gravity makes it difficult for defenders to knock him off the puck. Depending on the season he has in Spokane, he could sneak his way into the higher rounds of the draft.

I saved the best for last. Mittelstadt was far and away the best player on the ice last night. He was equally good with the puck as he was without it. Seemingly in the right place at the right time, Mittelstadt showed excellent hockey IQ and poise. A dangerous north/south player, the future Minnesota Golden Gopher showed he can transition the play from the defensive zone and dangle through defenders with ease. His overall game is one scouts will be looking for and it wouldn’t surprise me if he’s one of (if not the first) American players taken in next year’s draft.

Shawn Reznik
I'm the author of 10 books. They are all listed here: https://www.amazon.com/Russ-Cohen/e/B0034P5DNC%3Fref=dbs_a_mng_rwt_scns_share If you're looking for autographed copies just go to my twitter @Sportsology and DM me.