You are here
Home > Baseballology > THE BOSS: GEORGE STEINBRENNER

“If things go right, they’re his team. If things go wrong, they’re your team. His favorite line is, ‘I will never have a heart attack. I give them.'”

With the recent unfair turn down of his admission to the Baseball Hall of Fame, one can only wonder what “the Boss” if he could have, would have said. He was one of a kind with a mouth to match.

Since he would come to view himself as a Yankee Doodle Dandy, it was appropriate that he was born on the Fourth of July 1930 in Rocky River, Ohio. The son of a shipping tycoon, George Michael Steinbrenner III had a life of privilege; sports was always his thing. At Culver Military Academy he played on several sports teams.

A graduate of Williams College, the young Steinbrenner was an English major. His senior thesis was the heroines in the novels of Thomas Hardy. After graduation from Williams in 1952, Steinbrenner served two years in the Air Force coordinating the athletic program at Lockbourne Air Force Base in Ohio.

There were also stints as assistant football coach at Northwestern and Purdue universities. And in the world of business, he was owner and CEO of the American Shipbuilding Company, a Cleveland-based firm.

It was in Cleveland that Steinbrenner met the veteran baseball executive Gabe Paul. Way led onto way and with 13 partners, Steinbrenner purchased the team from CBS for the bargain price of an estimated $10-million. Then the price was actually less than that for the City of New York got involved.

PAUL DOHERTY: I believe the city paid $1.2million for the Stadium parking garages. And the most interesting and ironic part of this deal was Steinbrenner’s personal cost for his shares was (in 1973 dollars) $168,000 (in today’s dollars, $905,000). What a bargain! The sports deal of the decade if not the century!!

When CBS had purchased the Yankees, the team had been to the World Series 14 of the previous 16 years. In eight seasons of CBS ownership, the Yankees finished second only once, below fourth place five times. In 1972, attendance at Yankee Stadium fell below 1 million for the first time since 1945.

On January 3, 1973, a rainy morning, the youthful industrialist George Steinbrenner was at Yankee Stadium’s Stadium Club for the purchase announcement and press conference. He said he would be too busy with his shipyard business to be that involved in the day-to-day affairs of running of the team. “I’ve got enough headaches with my shipping company,” he said. We’re not going to pretend we’re something we aren’t. I’ll stick to building ships.”

PAUL DOHERTY: At the “21 Club” on January 10, 1973, Steinbrenner’s limited partners were introduced. They were all there and presented to the media.

Limited partner John McMullen would later say: “Nothing is more limited than being a limited partner of George’s”. How right McMullen was. George Steinbrenner was the Yankees, involved in every aspect of the franchise from facial hair to boardrooms to bathrooms. And he was fond of spouting homilies, maxims, mottos:

“When you’re a shipbuilder, nobody pays any attention to you,” he said. “But when you own the New York Yankees … they do, and I love it.”

“Give me a bastard with talent.”

“Owning the Yankees is like owning the Mona Lisa.”

“I’m not a good loser. I believe in what Ernest Hemingway said: ‘the way you get to be a good loser is practice.’ “And I don’t want to practice.”’

““You measure the value of a ballplayer by how many fannies he puts in the seats.”

“Winning is the most important thing in my life, after breathing. Breathing first, winning next.”

With a fondness for quoting military figures, the Yankee top man viewed games as an extension of war. In the tunnel leading from the Yankees’ clubhouse to the field, he had a sign for a time posted with a statement from General Douglas MacArthur: “There is no substitute for victory.”

PAUL DOHERTY: Later on it was replaced by the DiMaggio quote: “Iwant to thank the good Lord for making me a Yankee.”

George Steinbrenner was a driven, dedicated, determined owner through his stormy, controversial, highly productive and record tenure with the Yankee franchise. So involved was he that in his first 17 years Steinbrenner changed managers 17 times. He then upped that total to 21 managers and 11 General Managers moving in and out in his 37 years as Yankee owner. Incredibly, his on again off again relationship with Billy Martin saw the hyper pilot get five separate terms as manager of the Yankees.

PAUL DOHERTY: Frank Sinatra had recorded Kander and Ebbs’ “New York, New York” in 1979. At some point in 1980, after Sinatra’s “Trilogy” album was released, the Yankees began playing the song after home wins. It soon became a tradition.

Originally, the Yankees played Sinatra’s version after victories. Lisa Minnelli’s recording of the tune was played after losses. Minnelli was not pleased. She sought a change. She got a change. The Yankees stopped playing her version. The “Boss” again did his thing.

There were all the “Boss’s” overreaching and annoying deeds, comments and moments that sullied George Steinbrenner’s image among fans, media people and players.

The 1981 World Series pitted the Yankees against the Dodgers, the third time the ancient rivals went at each in five years. A 9-2 win at Yankee Stadium in Game Six made LA world champions.

FRED CLAIRE: Steinbrenner’s apology came in the form of a release which he passed out after we won the series. I thought it was strange. The Yankees had given all they could to win. There was really no need to apologize for an all-out effort by your team.

Nearly a decade later the Yankees hadn’t been back to the playoffs. On   July 30, 1990, “the Boss” surrendered control of the Yankees. He was banned from baseball for life (which turned out to be three years) by Baseball Commissioner Fay Vincent for alleged payments made to a gambler in New York City seeking to gain damaging information on outfielder Dave Winfield. That day at Yankee Stadium fans chanted: “No more George.” That was low ebb time for the Yankee principal owner. Steinbrenner had previously been suspended in 1974 for illegal contributions made to President Richard Nixon’s 1972 campaign fund. .

“I am dead set against free agency,” Steinbrenner said. “It can ruin baseball.” He said one thing and then said something else.  In the first five years of the free agency, Steinbrenner signed 10 players for of $38 million, big money then. Catfish Hunter, Reggie Jackson, Dave Winfield and many others were signed as free agents. There were years when so many free agent superstars were on the Yankee roster, that managers had to juggle to find places for them in the lineup.

There was always the bad, the ugly, the good when the subject matter was George Steinbrenner and his place in Yankee ownership history.

The good was restoring the Yankee brand, mystique, legend, success. In addition to the seven World Series titles, the Yankees won 11 American League pennants and 16 AL East titles under the watch of the “Boss.”

Steinbrenner negotiated a landmark $486 million, 12-year cable television contract with the Madison Square Garden Network in 1988. In 2002, he was the driving force behind the creation of the Yankees’ own YES Network.

What never received much publicity was his sending of money to injured high school athletes so they could go to college.  He believed in keeping older friends and contacts from his football days on the payroll. He believed in giving “second chances” – see Darryl Strawberry and Dwight Gooden. Partial to the military, Steinbrenner set a policy at Yankee Stadium – men and women in uniform were admitted free.

I had two chance meetings with George Steinbrenner. Both were memorable. I was sitting in his office at Yankee Stadium with the late Robert Merrill, the great opera singer, who for many Yankee fans was better known as the man who sang the “Star Spangled Banner.” I was interviewing Merrill for a profile. This was late 1980s. Steinbrenner charged in, military stance, bristly and in charge.

“What the hell are you doing here?” he snapped at me.

“I was invited in here by Mr. Merrill.”

When I explained, the Yankee principal owner relaxed and told me to get myself a drink. I declined saying I wanted to fully concentrate on my interviewing job at hand. Hearing that, Steinbrenner exited.

The second meeting was around the same era at Madison Square Garden at halftime in the VIP quarters where drinks flowed freely and most tried to show off their hoop IQs. Steinbrenner came by and exchanged pleasantries with the late Red Holzman, then the former and legendary coach of the New York Knicks who I was with.

“The Boss” then turned to me. “And you are writing Red’s autobiography?” How he knew what I was doing I never knew.

The two interactions with the “Boss” gave me insights into a man on the top of his game, making connections, taking charge. He was something else.

In the mid-2000s, the Yankees became the first American professional sports franchise whose worth was estimated as being over $1-billion. After the 2007 season, Steinbrenner’s health was poor. He officially retired and handed control of the Yankees to his sons Hank and Hal Steinbrenner. In 2009, the estimated net worth of George Steinbrenner was estimated at $1.3 billion according to Forbes magazine.

On July 13, 2010, the bigger-than-life George Steinbrenner died after suffering a heart attack in his Tampa home. It was the day of the 81st All-Star Game. In his 37 years in charge of all things Yankees, his team won more games than any other team in baseball. 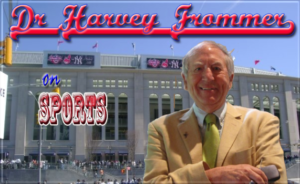 One of the most prolific and respected sports journalists and oral historians in the United States, author of the autobiographies of legends Nolan Ryan, Tony Dorsett, and Red Holzman, Dr. Harvey  Frommer is an expert on all things baseball having written many books on the team including the classic REMEMBERING FENWAY PARK.

A professor now for more than two decades in the MALS program at Dartmouth College, Frommer was dubbed “Dartmouth’s Mr. Baseball” by their alumni magazine. He’s also the founder of www.HarveyFrommerSports.com.

Mint, signed, discounted Frommer books are available from his site.