Isaiah Whitehead made his first career NBA start last night for the Nets. It had nothing to do with how he played. He started only because Jeremy Lin and Greivis Vasquez were out with injuries.

Not surprisingly, Whitehead was terrible in making the most of his first start. He finished the game by scoring eight points, grabbing two rebounds and having three assists in the 23 minutes he played. He was a -2 in the Nets’ 99-95 loss to the Hornets at Barclays Center. This type of performance should send him to the NBA Developmental League. This is where he is better off rather than embarrassing himself on the court. The Nets did not expect much from their second-round pick from a draft-night trade with the Jazz. They knew he would be a project, which is why they kept him on the roster.

It was a mistake on Whitehead’s part to enter the NBA Draft this year. He wasn’t ready to play in the NBA. It’s been obvious from his body of work so far. He struggled in his sophomore season for Seton Hall until he was hot in March and in the Big East Tournament. His play that month was why Seton Hall made the NCAA tournament this past season.

One good month does not mean he was ready to play in the NBA. He needed to add little muscle. He was not brawny enough to go up against NBA players. He had to work on his jump shot. He also had to know how to break down defense. It’s understandable why Whitehead wanted to go to the NBA. He needed money to take care of his family. He had to pounce while the opportunity was there.

Still, he had to know he wasn’t ready. He is getting minutes now, but he is overmatched right now. He can’t play defense, and he does his usual thing of taking ill-advised shots. He is also slow. The Nets are going to give him a chance to learn on the job, but if he gets worse, the braintrust has to wonder if he is better off honing his skills in the D-League.

Sending him to the D-League is a prudent move for a tweener right now. It’s where he can learn the game and have the game slow down for him. The NBA is too fast for him to learn on the job. Whitehead knows this. He has done the best he could. He has worked hard at practice. He has done enough to get minutes.

But when Vazquez and Lin come back, he is probably not going to be getting minutes. It would be counterproductive to have him sit on the bench. It’s not a way to develop players. The NBA is no place for him to learn on the job. There are too many talented players in the league that he is going up against every night. The last thing the Nets want is seeing his confidence erode.

Honestly, he is reach. It’s hard to believe he will be a productive player in the NBA. He can’t play defense. He is not a good shooter. Maybe first-year Nets head coach Kenny Atkinson can harness Whitehead’s talent, but there’s only so much he can do. Whitehead basically did what he always does last night, which is shoot his team out of the game by taking ill-advised shots.

He should have done a better job of being a facilitator by giving the ball to Brook Lopez or Rondae Hollis-Jefferson. He needed to let the game to him rather than dictate the game. It’s a learning process for him. What does not beat him will make him stronger. The Nets are going to be patient as much as they can, but if he is going to put up awful performances like last night, what’s the point? 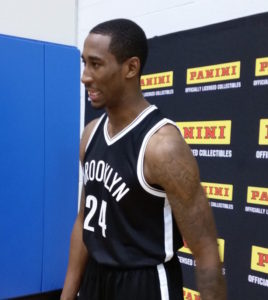 The Nets are saying the right things about him. They are not going to damage his confidence by being negative about him publicly. If he was playing for a mediocre to a great team, he would be watching from the bench. He is fortunate to play for the Nets.

This can’t be a scholarship for him. He has to earn his minutes. He must earn his playing time.

He has so much to learn before he can be a productive NBA player.

photo of Hollis-Jefferson by Sportsology