For your reading and wondering pleasure, here come the Yankees in quiz form from the professor of Bronx Bomber content. No peeking at the answers. Take the quiz first. Five correct answers makes you an “All Star.”

Lower than that read some of my Yankee books.

Herewith: 150 provocative questions and answers with some sure to be daunting even for the most extreme Yankee diehards.

1. What player wore number 7 before Mickey Mantle did?

2. Whose number (and what was it) was retired by both the New York Mets and Yankees?

4. Name the four managers who have piloted both the Yankees and the Mets. 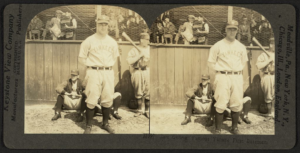 6. Name the player Derek Jeter replaced in 1996 to become the regular shortstop.

7. What former Yankee was the first pitching coach for the New York Mets in 1962?

8. Elston Howard was the first black player on the Yankees in 1955.  Who was second?

9. Who did George Steinbrenner buy the Yankees from?

10. Trick question: Which of the following was not a Babe Ruth nickname?

11. Name the National Football League coaching legend who played briefly for the Yankees.

12.  .What number did Mickey Mantle first wear when he came up to the Yankees?

13. Reggie Jackson hit three home runs in Game 6 of the 1977 World Series against the Los Angeles Dodgers—each off a different pitcher.  What pitcher gave up Jackson’s third home run?

14. Reggie Jackson was inducted into the Hall of Fame as a member of what team?

15. What Yankee pitcher has the       most World Series victories?

ANSWERS
1.  Mickey Mantle was the last Yankee ever to don the number 7, wearing it from 1951 until he retired. Fourteen other Yankees wore the number in their career, the last two being Bob Cerv and Cliff Mapes. They wore the number at times during that first season.

Harvey Frommer is one of the most prolific and respected sports journalists and oral historians in the United States, author of the autobiographies of legends Nolan Ryan, Tony Dorsett, and Red Holzman, Dr. Harvey

Harvey Frommer’s newest: THE ULTIMATE YANKEE BOOK http://www.frommerbooks.com/ultimate-yankees.html can be ordered on Amazon