Here are some notes from players who may have been scouted today:

Ryan Ferland – 6-0, 175 – G – He’s a freshman with a lot of talent. He gave up two goals in the first win of the season. He covers the corners well. His glove his sure-handed in traffic. He has good stick control and makes safe clears. He made quick leg saves in traffic and a great leg cover up in the third when the game was tight. He doesn’t glove everything cleanly. He faced 40 shots. (pictured below) 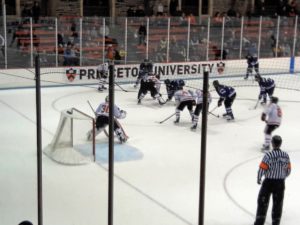 Max Veronneau – 6-0, 180 – RW – He’s a sophomore with a lot of talent. He attended the Las Vegas Golden Knights inaugural rookie camp this summer. His offensive numbers have been on the rise. He scored a nice goal with speed and a quick backhand in close. His speed is better than last season. He had great pursuit to the net even late in the game. He played on the top line.

Alex Riche – 6-0, 190 – C –This junior is a good passer. He has a good hockey I.Q. He played a little on the PK. His defensive awareness is solid. He strips the puck well. He moves the puck up the ice well.

Paul Berrafoto  – 6-0, 181 – G – He’s a senior goalie. Somebody should sign him. He was a top goalie in the NAHL. He has good anticipation of the play. He was beat short-side and high shoulder. One goal wasn’t his fault. He made some nice saves in the splits. He has a fast glove hand. He freezes the puck quickly. He was solid for most of the third period to give his team a chance to fight back.

Scott Pooley – 6-2, 199 – RW – The senior scored a hat trick in a game against Dartmouth. The first of his career. He was solid on the power play. He worked well in the corners and had a nice goal off a rebound in the crease. He was a constant net front presence. He has good hands and a fast wrist shot. He had some great passes to setup scoring chances. He has average speed.