This isn’t R.A. Dickey we’re talking about here. That trade was explainable, and Noah Syndergaard was a part of that deal. Top prospect, Travis d’arnaud was the jewel of the deal. At least that’s what the Mets thought and so far it’s been the opposite and it will stay that way. The point is the Mets still don’t have the kind of player development and management who can “properly judge talent” and because of that, a trade for the young hurler will be devastating to the fan base and the team.

I love the reports that a half a dozen teams are interested in him. Really? That’s it? A guess a pitcher who was 13-4, with a 3.03 ERA and 155 strikeouts in 154 innings isn’t that desirable. Or is it that teams don’t want to take place in an absurd exercise to theoretically trade for a player from a franchise that can’t hold on to their top talent. This is the mark of a rookie GM and it doesn’t make sense.

The Mets have plenty of money. They’re not a small market team. They’re still acting like one. At 26, do the Mets believe he’ll break down soon? He’s 37-22 lifetime. Zack Wheeler had a nice year. If you push him up to the second spot in the rotation that could change things. Justin Dunn in the future and hopefully Jason Vargas will be in the past (I know, he’ll be back). Steven Matz can’t be trusted so losing Syndergaard, and adding (____) won’t make the Mets pitching any better and at the end of the day, if that’s bad, it won’t matter if they correct other areas. The bullpen needs work, but let’s get washed up guys for that and focus on a trade that may never happen while other teams trade and sign for players that can make their teams better. 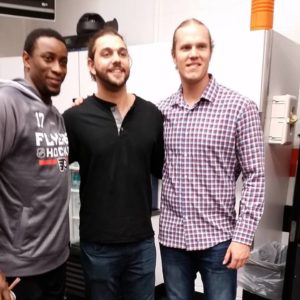 Baseball prospects are a crap shoot. And when teams get a package of them for a star, you’re lucky if you get more than one that helps a team long term.

If the Mets trade Syndergaard, they’ll take an eventual step back. Teams know that. They expect that and hope for that. They’re hoping that they don’t ante up for Jacob deGrom. This is how the upper echelon teams in baseball stay competitive. It’s not all through drafting and it’s not all through free agency. The truly great general managers win trades. The Mets currently have one who’s yet to make a trade. Do you trust him with Syndergaard being the first one?