The Helsinki-based Jokerit club is one of the most storied pro hockey franchises outside of the NHL and it served as a training ground for Hall of Fame talent like Jari Kurri and Teemu Selanne since it was formed back in 1967. Over the decades, the team won six SM-liiga titles and moved over the KHL three years ago. 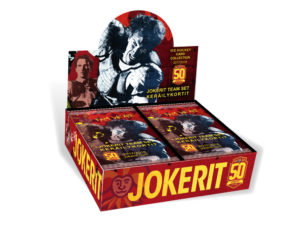 To celebrate half a century of success, trading card maker Sereal, who have produced KHL products for several years, recently issued a special release dedicated to Jokerit’s history and stars of today – including early cards of one of the hottest prospects around in Nashville Predators draftee Eeli Tolvanen.Each box of 2017-18 Sereal Jokerit 50th Anniversary Collection contains 20 packs and will be loaded up with 10 limited parallel cards along with at least four other big hits – many of which will feature autographs or memorabilia pieces. There are five cards per pack, but those featuring a thicker card will have less inside. The basic 2017-18 Sereal Jokerit 50th Anniversary Collection set is made up of 33 cards showing off members of this year’s team along with members of the coaching staff and the general manager – who just happens to be Kurri. There are also two other sets to build inside in Getting Ready for Season 2017-18 (28 cards) and Historic Moments (18 cards) which look back on some of the greatest times for Jokerit. Both the base set and the Getting Ready cards both have four levels of parallels: Silver (/100), Gold (/50), Blue (/20), and the one-of-one Green. One top of that, there are printing plate parallels for the 33 basic cards.Autographs draw heavily from today’s edition of Jokerit, with 28 different active players signing along with coach Jukka Jalonen. Each of those cards are limited to 50 copies each, but there are two other autographs to track down as both Selanne and Kurri signed some labels for Sereal. Those two legends are numbered out of 30.

There are plenty of limited memorabilia hits to be found in packs of 2017-18 Sereal Jokerit 50th Anniversary Collection as well. The regular Jersey series (/50) can be found for 28 roster players and the Patch version is a tougher pull as each is limited to just 20 copies. If that was not enough, each player has a 50th Anniversary Patch that is numbered out of two and look great when placed side-by-side. It should be noted that these pieces are from event-worn jerseys.One thing that North American card collectors may not realize is that Sereal manages to make some of the best-looking game-used stick cards around. For this Stick Series set, there are 17 players to collect – including Kurri and Selanne along with team captain Peter Regin. Each is limited to 50 copies, but there is also a Nameplate variation to look for. Traditional insert cards are also present here, but they are difficult to find. Gallery of Captains takes a look back at nine Jokerit captains and their names are etched onto a metal bar embedded into the card. The Silver version is numbered out of nine, but the Gold edition is a one-of-one treasure. Speaking of one-of-a-kind cards, there is also a redemption card that one lucky collector can exchange for a game-used jersey of Sami Lepisto. Those busting a full 10-box case of 2017-18 Sereal Jokerit 50th Anniversary Collection should yield a pair of one-of-one cards. 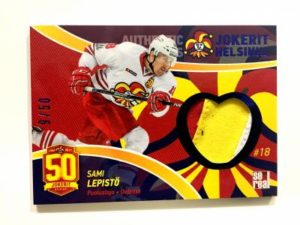 The bottom line with 2017-18 Sereal Jokerit 50th Anniversary Collection is that it is a non-traditional break for the typical North American hockey card collector that is on par with products that are produced here. There is decent value inside boxes and plenty of limited hits. Finland is a great hockey collector’s market and these cards should perform quite well on the secondary market as well. Check with your local card store or distributor to see if they can order a box in for you, or visit Sereal’s official store (http://www.store.sereal.eu/all_products-1/params/category/71378/item/413758/) to grab a box before they are gone.

Stephen Laroche
I'm the author of 10 books. They are all listed here: https://www.amazon.com/Russ-Cohen/e/B0034P5DNC%3Fref=dbs_a_mng_rwt_scns_share If you're looking for autographed copies just go to my twitter @Sportsology and DM me.