You are here
Home > Hockeyology > 2018 Coors Light NHL Stadium Series “By the Numbers.” 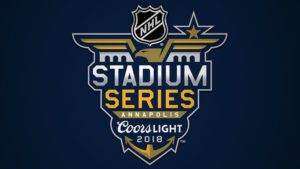 6 – Games played between the Capitals and Maple Leafs in the First Round of the 2017 Stanley Cup® Playoffs, the first-ever post-season matchup between the two clubs. Washington won the series 4-2, which included five games decided in overtime.

7 – Local community rinks around the DC Metro area that will have a “Recycle the Game” gear donation net. Fans are encouraged to donate gently used hockey equipment that will be collected, cleaned, and donated to military families across the U.S. and Canada as a legacy to the 2018 Coors Light NHL Stadium Series™.

8 – Number worn by Washington Capitals forward Alex Ovechkin, who leads the NHL in goals scored with 39 (39-32-71 in 64 GP) through games played on Feb. 28. Ovechkin is three goals away from 600 in his career heading into Saturday’s game.

20.3 – Average age of the top-three scorers on the Maple Leafs: Mitchell Marner, 20, (17-36-53); Auston Matthews, 20, (28-22-50); and William Nylander, 21, (14-35-49).   25 – Sled hockey players that will participate in the NHL Sled Series game featuring USA Warriors vs. Soldier On. The game will include current and veteran military personnel who were wounded while serving their country. The friendly match will be played at Bowie Ice Arena on Friday, March 2, and is part of the League’s ongoing Hockey Is For Everyone efforts, celebrating all people who play and watch hockey.

25 – The 2018 Coors Light NHL Stadium Series™ will be the 25th NHL regular-season outdoor game, and the third and final such game of the 2017-18 season, which included the 2017 Scotiabank NHL100 Classic™ on Dec. 16 at Lansdowne Park in Ottawa and the 2018 Bridgestone NHL Winter Classic™ at Citi Field in New York on New Year’s Day.

34.9 – Average temperature, in degrees Fahrenheit, for all 24 of the NHL’s previous outdoor games.

37 – Average low temperature, in degrees Fahrenheit, for Annapolis on March 3 according to accuweather.com.

53 – Length, in feet, of the world’s largest mobile rink refrigeration unit, specially built for outdoor games conducted by the NHL.

79 – Number of points earned by the Washington Capitals through 64 games this season, placing them atop the Metropolitan Division through games played on Feb. 28.

85 – Number of points earned by the Toronto Maple Leafs through 66 games this season, placing them in second in the Atlantic Division through games played on Feb. 28.

300 – Ton capacity of refrigeration trailer that will keep the ice cool at Navy-Marine Corps Memorial Stadium.

491 – Approximate driving distance, in miles, from Toronto to Annapolis, according to Google Maps.

697 – Total Number of players and head coaches who have participated in the NHL’s 24 regular-season outdoor games to date.

1000 – Gallons of water restored through the purchase of water restoration credits for every goal scored during the regular-season, including the outdoor game, via the League’s Gallons for Goals ™ initiative. League-wide the NHL and its Clubs are celebrating NHL Green month in March. Since 2011, more than 88 million gallons of water have been restored to streams across North America.

1845 – The United States Naval Academy at Annapolis, the second oldest of the five United States service academies, officially opened its doors on Oct. 10, 1845.

1940 –Year that the late Dr. John McMullen graduated from the United States Naval Academy. In 1982, Dr. McMullen purchased the NHL’s Colorado Rockies™ and moved the club to New Jersey where he presided over the Devils’ first two Stanley Cup® championships in 1995 and 2000.

3,000 – Gallons of coolant used to freeze the rink at Navy-Marine Corps Memorial Stadium.

25,000 – Donation from the NHL and Monumental Sports Foundation that will go to the United Heroes League (UHL), a nonprofit dedicated to empowering military families and children to stay active.

35,760 – Square footage of the aircraft carrier used as décor on the field at Navy-Marine Corps Memorial Stadium for the 2018 Coors Light NHL Stadium Series™.

Listen to Russ talk about the event here:

NHL, the NHL Shield, the word mark and image of the Stanley Cup and the word mark NHL Winter Classic are registered trademarks and NHL Stadium Series name and logo, NHL100 Classic name and logo and the NHL Winter Classic logo are trademarks of the National Hockey League. NHL and NHL team marks are the property of the NHL and its teams.  ©  NHL 2018.  All Rights Reserved.