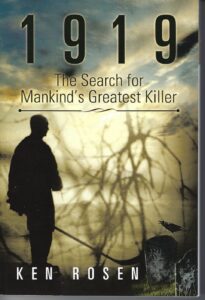 The first one is a terrific tome “1919, The Search For Mankind’s Greatest Killer”. This book deals with Habs star, Newsy Lalonde, and a serious injury he incurred on the ice. This book is cringeworthy at times and skillfully written. Oh, and it deals with the Spanish Flu pandemic and how Philadelphia failed back then. Hockey fans and people who want to learn about the famous pandemic will enjoy this. Ken Rosen deserves a round of applause here.

“Fly Fishing Austin and Central Texas” is a good read and Aaron Reed talks about what got him into fly fishing, and he shows off some great spots that can save the reader some time!

Skyhorse Publishing has a good one in “Miracle in Lake Placid”. John Gilbert sums how we feel about this game and what lead up to it 40 years later. I love the color picture gallery. There’s a lot of Herb Brooks content here, and it talks about when he joined the New York Rangers afterward. This is a fun read.

The book “Thin Ice” by Ryan Minkoff is a terrific read for hockey fans. I loved the prologue. The fact that he wore #66 as Mario Lemieux and players went after him as a result is fantastic. This is a very honest take, and it takes you on a journey that hockey players take, but fans rarely get taken into that world. Now they do, thanks to Rowan and Littlefield.

The book “Personal Next” was written by Olympian Melinda Harrison. She was a swimmer in the 1984 Olympics, I was in college at the time. She was representing Canada. She outlines career plans for former athletes and CEO’s and professionals. I cover hockey, and there’s a nice testimonial from Mike Hough, he last played for the New York Islanders. There’s a lot you can learn by reading this book. 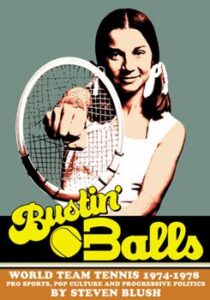 ‘Bustin’ Balls” is a great title for World Team Tennis, it took place 1974-78, I knew about it early because my dad was a printer and his company made advertising posters and such to introduce the league. You see Billie Jean King and the Philadelphia Freedoms right out of the gate. There’s a great story associated with this team, and King is a legend and one of the all-time great athletes ever. Author, Steven Blush, has a great book on his hands, it has a nostalgic look, and it’s an amazing look back at a special time in sports in this country. The quotes, print ads, and layout of this book are spectacular, Feral House did a great job. 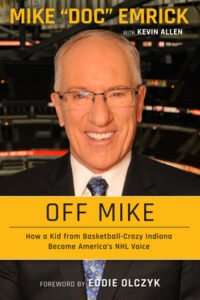 “Off Mike” published by Triumph, written by Kevin Allen about the legendary career of Mike “Doc” Emrick is a dream team situation. Edzo wrote the foreword, and that’s a great start to a great book. Doc is as prolific a speaker as Allen is a writer. Doc loved his job, and you could tell by listening to his broadcasts, and if you ever met him in person, as I did many times, you would know. Emrick’s career has spanned decades, and there are so many great moments and athletes that get highlighted along with his journey. That’s what this is, a journey for the reader, hockey fans and fans of all sports will love this as much as I did.

All of these can be found in various places, Amazon.com is one, and my books can be found there as well. barnesandnoble.com is another. DM me @Sportsology for signed copies.