You are here
Home > Hockeyology > A Fantastic Trio of Hockey Books

SI has three great hockey books on the market. The first is very intriguing called “Hockey Then to Wow”. It’s a hardcover gem that has some great photos and almost an infographic look at the games equipment, including skates and goalie masks.

It delves into personalities in coaching, the enforcers and characters of the game. It starts with Eddie Shore and should have ended with Ilya Bryzgalov, I kid.

Another one is “My First Book of Hockey”. This book delves into the rules like offsides and terms like hat trick. The photos and graphics are fun and there’s a picture of the Zamboni in the book. Enough said. 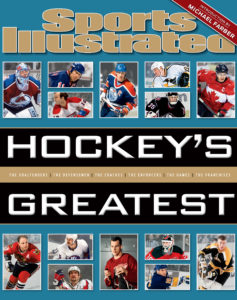 “Hockey’s Greatest” by the editors of SI is a fun coffee table book. There are some great photos of Wayne Greztky, Bobby Orr, really everybody who’s noteworthy is in it. The fun part about this book is the rankings. Having done one of those myself, I won’t release what the actual rankings are but suffice to say, they are interesting and it creates some good water cooler conversation.

The photos in this book are special. Hockey fans will love any of these books. Father’s Day is just around the corner and the kids book would make great summer reads.