Brett Berard didn’t make the USA roster because his coach at Providence, Nate Leaman, is the head coach of the 2021 World Junior Championship squad, it happened because he never takes a shift off, and he can create situations out on the ice.

“He’s a great coach, and I’ve enjoyed playing for him since I got to school,” said Berard. “He’s really honest with you when something is going good or going bad, and he’ll correct that. So, I think that he wants what’s best for you, and I really enjoy playing for him.”

Berard isn’t a “copycat” agitator. He can play and could play a different role. He’s only 5-9, but you wouldn’t know it when you see him play.

“Brad Marchand is a guy I started to model my game after, especially last year. He’s always been a guy who I’ve been watching. A guy I like to use to is Brendan Gallagher, they’re undersized, skilled guys that have a feisty edge to them and like to get opponents a little mad and take advantage of them.” 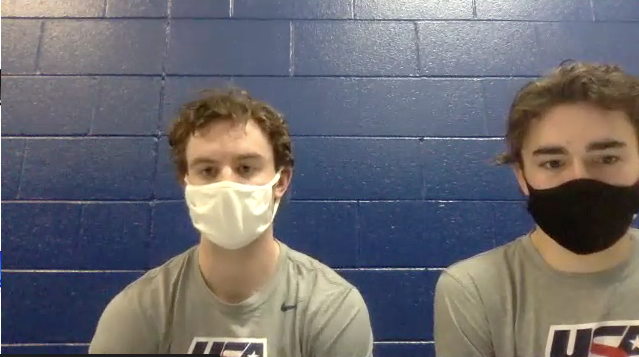 You can plug him in at right wing or left wing, anywhere from the 2nd line to the 4th line. He skates well, has a terrific one-timer, and he is patient around the net and will wait out goalies. He can provide some additional offense that Team USA might need late in tight games.

“I think I’m a skilled forward, but I have that feisty side to me to get under my opponents’ skin,” Berard smiled. “Whatever role I need to play, I’m confident I can do it.”

On this team, he’s likely on the energy line, and that’s fine. He’s the guy that can add something if the game is tied or if his team is behind. A lot of teams need this type of guy, and to be honest, I think the New York Rangers got a potential 5th round steal. Time will tell on that one, but right now, in the tournament, he’ll be noticeable. He always is.