Dylan Cozens is now a part of Team Canada’s leadership group. He will wear the “A” for the 2021 World Junior Championship along with Bowen Byram. Both are so close to seeing NHL minutes, and Cozens could take a good tournament right into training camp for the Buffalo Sabres and start playing in the NHL as early as 1/13.

In a recent practice, he was playing top-line center, and Kirby Dach, the team captain, was playing right wing, and fellow Sabres draft pick, Jack Quinn was on the left side. Cozens does look physically stronger and that could be the little edge he’ll need this year to get through the rigors of an NHL season. If nothing else, he could be a part of the taxi squad

“It’s something I’m still learning, trying to adapt to. A lot of guys play center on their club teams. Some guys are going to have to move to the wing, I’m more than fine moving to the wing,” said Dach. “I think it’s easier going from center to wing than wing to center.”

Dach played 64 regular season NHL games and nine playoff games. He will serve as a great tutor for Cozens. In a normal year, Dach would be playing for the Blackhawks, and they would likely keep him in Chicago. But with no NHL going on, Dach is playing, and he’ll dominate, and Cozens will be a beneficiary of that.

Cozens is now listed at 6-3, 198 pounds. He was listed at 183 when he was drafted seventh overall in 2019. He has all the necessary tools in his toolbox. He has an elite wrist shot. I was behind a pane of glass when he was ripping them on net a few summers ago and saw it first-hand, the same way a goalie will in this tournament. 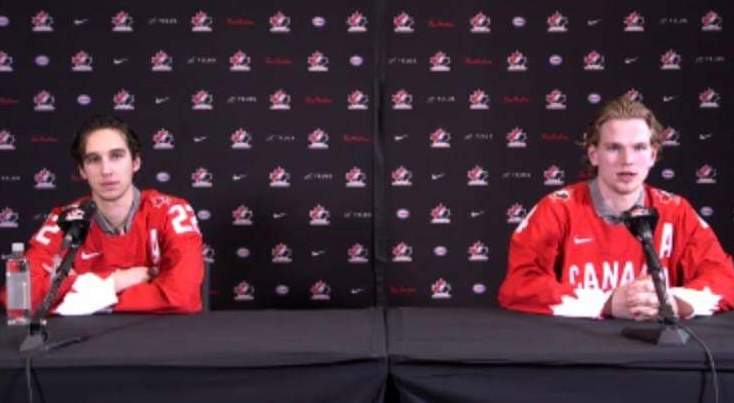 “To wear this letter takes a lot of responsibility, and I wear it with pride and humility,” said Cozens. “We have matured a lot in the last couple of years. With experience and what it takes to win. Having experience of last year’s World Juniors that’s huge for us. Just being a second-year guy on this team now. We know how hard it’s going to be.”

Quarantine life isn’t easy for a human. Yes, hockey players are regular people with special skills, but they have to learn how to deal with that, and so far, Cozens hasn’t had any issues in the bubble.

“We’ve done 14 days already so doing five was a bit of a breeze for us,” Cozens chuckled. “Better WiFi here though.”

Canada is the prohibitive favorite in the tournament, but the beauty of this tournament is anything can happen. It can be very unforgiving so let’s see what happens out on the ice.