“I had everything I needed but it wasn’t what I was looking for. I started to research for another opportunity to grow. In 2017, I had a chance to go to Canada and play in the CWHL,” Kartanbay explained. “I passed the first tryout with the Calgary Inferno but not the second. They invited me to their farm team (Calgary Coyotes). During the season they can call them up. It was a great experience for me.”

In June, she was hired as one of the coaches of the Princeton Tiger Lillies, a U14 girls team located in New Jersey.

“I worked at Pro Skate a lot last year, so I know people there and other coaches. At the beginning of June, when I had a chance, I asked about this job and they said I’d have to interview and if I passed it they would hire me,” Kartanbay stated. “It should be an interesting season. In Kazakhstan hockey is a little bit “Russian-style” for practices and training.”

Her coaching style will be different. It will harken back to the days of the Red Army Russian teams of the past. Just the training part of it used techniques that didn’t exist in North America at the time.

“In 2018-19, I was in Canada. I volunteered a lot with coaching too. I will try new stuff,” she reiterated. “Old Russian style like Slava Fetisov trained. We still use that in Kazakhstan. I’ve been talking to my national team head coach. It’s still underway.” 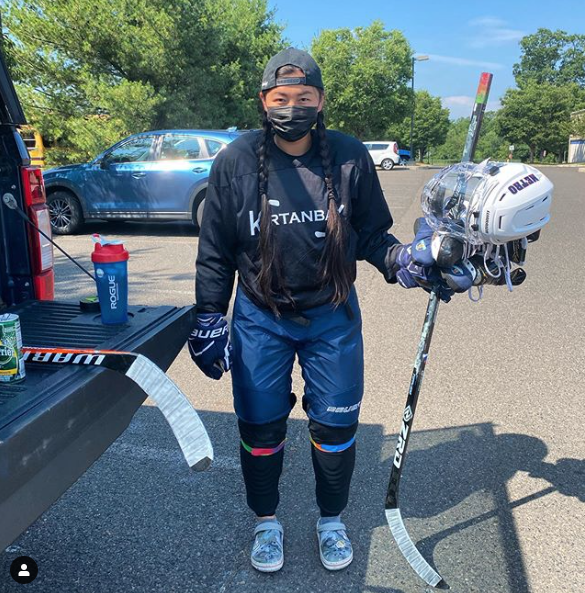 Last season Kartanbay played for the Metropolitan Riveters and this year things are a bit more up in the air.

“Hopefully I will play. I applied for free agency. My employers said they will work around it and they will support me. Girls want to see how I will play. They’ll work the Tiger Lillies schedule. I’ve always had great support and I’m really happy about that.”

Kartanbay is a real success story on and off the ice. If you follow her on Instagram, she’s always playing hockey. That may slow down when the Tiger Lillies start practicing at the end of July, but before then she was playing roller hockey for the first time and banged up her knees pretty good.

“It’s ridiculous. I was very nervous, and I told the guys it was my first-time playing roller hockey. When the game started, I forgot I was on a different surface,” she laughed. “In the game, it’s going great and it’s so emotional. I scored three goals and I forgot how to stop. I was in front of the net to score one more and I ran into it. It was painful. I am going back.”

In World Championship play, she’s walked away with some medals and some great experiences.

“I won silver and bronze medals in various tournaments. We went to Japan in 2017 and it was a different world. It was a great experience for the athletes and the tourists,” she added.

She enjoys life and living in New Jersey. She has a bubbly, positive personality. I have no doubts that she will be a successful coach.