You are here
Home > Hockeyology > Dayton Rasmussen Had an Impressive Combine

Buffalo – – One player was ready to attack the rigors of the NHL Combine was goaltender, Dayton Rasmussen. The 6-2, 200 pounds this goaltender is physically “ripped”.

“I think I did well. I haven’t been able to do that much physical activity since having a concussion,” he revealed. “I did how many I thought I could do. I looked up at the board and saw 16. That’s why I did 17. I thought I got my 18th up but it was a little wobbly. My goal coming in here was to set the bench record. That’s not typical for a goaltender.”

Rasmussen played with two teams in the USHL this season. He started with Tri City and ended up with Chicago. 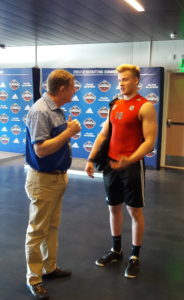 “I got traded two weeks before the trading deadline,” said Rasmussen. “It was a rebuild. I was happy getting an opportunity with a potential championship team. It was a really good opportunity.”

Goalies have always been fit athletes but now Rasmussen may be the strongest athlete in this draft.

“I played a lot of football and lacrosse growing up. I was a middle linebacker and a running back. My brother has always been competitive with me seeing how much we can lift,” Rasmussen added. “I love bringing athleticism, speed and strength to the goaltending position.”

A few weeks ago the Eden Prairie, MN native suffered a concussion. He was cleared to compete but he had some limitations.

“I couldn’t do the Wingate or Vo2. They didn’t want me to take it to the max. I’ve been symptom free for two weeks. If it would have been my decision I would have done them all. It came down to Central Scouting and I totally respect their decision.”

He spoke to a fair number of teams.

“Flyers were my first interview. I spoke to the Rangers as well,” Rasmussen said.

Look out for this kid. He’ll soon be playing at the University of Denver. He has the drive and the physical strength to handle the rigors of pro hockey. He will definitely hear his name called in Chicago.