You are here
Home > Hockeyology > Despite COVID-19, Something Positive and Inspiring Happens At An NHL Arena

OTTAWA – Bria Roberts stood in front of Canadian Tire Centre with a huge but nervous smile. A handful of friends, family, and staff from the Senators and Aramark, their food and beverage provider, were socially distanced from each other, watching in anticipation. More than a hundred others from Ottawa, Kingston, where the Roberts family lives, and Newfoundland, where the Roberts family is from, were watching a Facebook Live stream.

After a countdown from 10, Bria did what any 13-year-old cancer patient dreams of doing. She rang the bell.

“This is my happy place,” Bria said of Canadian Tire Centre. She was wearing the same jersey she usually wears to the arena. It was a light purple Hockey Fights Cancer Sens jersey with the name, number and personalized signature of her favorite player, Bobby Ryan. The Senators winger sent his friend a video message congratulating her just hours before she rang the bell, symbolic of completing cancer treatments and officially entering the realm of remission.

For the past 70 weeks, Bria has gone through harsh chemotherapy treatments to deal with “Fred”, a cancerous brain tumor that was diagnosed in 2018. Every Thursday night for the past 70 weeks, the Roberts family has made the 120-mile trip from Kingston to Ottawa. They would stay at Ronald McDonald House, adjacent to the Children’s Hospital of Eastern Ontario (CHEO) in Ottawa. Every Friday morning, she would go in for her chemotherapy treatment with a smile on her face and a positive attitude. For the rest of the day, she would feel sick as they traveled home. Sometimes, the sickness would last through the weekend.

“She is a strong kid,” said her mother, April Roberts. “She never complains, no matter how badly she feels. She is just quiet about it. She is so strong and so positive. She just gets through it, and then gets ready for the next week.”

Many of the Thursday nights are spent at Canadian Tire Centre, as it is a regular home game night for the Ottawa Senators. The Roberts family were often guests in Bobby Ryan’s suite at the arena. He buys a suite every year and donates it for children from CHEO and their families to attend games. Ryan and the Roberts family became friends through Bria’s fight with cancer. During the season, when Ryan was fighting his own battle and was in rehab for alcohol-related issues, he was reaching out to Bria to congratulate her after treatments and encourage her to keep fighting. She has also become friends with Senators defenceman Mark Borowiecki, who often flips her a puck after the pre-game warm-up as she likes to go and watch the warm-up from along the glass before returning to her seat.

For her 13th birthday earlier this year, Senators owner Eugene Melnyk quietly gave his own personal suite to the family to invite relatives to go to the arena and enjoy the game. People within the organization were hoping to surprise her by letting her ring the bell at the final Senators home game of the season against Pittsburgh Penguins, but the COVID-19 pandemic stuck a fork in those plans.

While being told by a doctor that you have cancer is a tough pill for anyone to swallow, it is heartbreaking and life-changing for the parents of a child getting the diagnosis. Kerry Roberts, Bria’s father, is a member of the Canadian Armed Forces. He was deployed in Afghanistan when April called him with the news that their daughter had a brain tumor.

“I got on the first plane back to Canada,” Kerry said. “I had to get home as fast as I could.”

The military was very accommodating. They gave Kerry a job that kept him in Kingston, close to his family, during the long journey of cancer treatments.

While Bria’s journey through 70 weeks of chemo had its emotional peaks and valleys, the high point came in November when the Senators held Hockey Fights Cancer Night. It was scheduled for a Friday night game, a rarity in Ottawa.

“Bria had never been able to go to a game on a Friday night,” April said. “She’s always too sick and weak after the treatment. But she told me there is no way she was going to miss that night.”

Bria made it to Hockey Fights Cancer Night. Kerry gave her some ginger ale and pretzels during the day – something easy on her stomach. She felt good enough to go to the game, and she cheered and enjoyed the game as any hockey fanatic would.

Many people look at people with cancer with pity and sympathy. This is especially true for children with cancer. Bria doesn’t see her own situation that way. She sees herself as lucky – lucky that the tumor was going to be neutralized; lucky to be surrounded by love and support from her family, friends, and her favorite hockey team; and lucky that she will move forward and use her battle with cancer to inspire other people. She missed the final Thursday game the Senators played this year as she made her first public speaking appearance at Queen’s University in Kingston.

“I want to take what I went through and use it to help and encourage other kids who are going through cancer treatments,” Bria said.

Her words to live by through her battle have been “Tough times don’t last, tough people do.” And in the hockey world, Kingston is synonymous with toughness. Don Cherry is from there. So is Ken Linseman. Wayne Cashman is from Kingston. Doug Gilmour, Kirk Muller, Andy Sutton, John Erskine, and Bryan Allen are all hockey players from Kingston known for their grit and toughness. There are dozens of others, too.

As Bria Roberts rang the bell at Canadian Tire Centre with her big, infectious smile, she made an emphatic point. This 13-year-old girl from Kingston is as tough as any pro hockey player that city has produced.

Jeff Morris is a former ESPN.com columnist and is a three-time Ontario Community Newspaper Association Columnist of the Year award winner. Last year, Jeff had brain surgery to remove a tennis ball-sized tumor that had eaten almost a third of his skull before penetrating his brain. He survived the surgery, endured daily cancer treatments, and rang the bell July 31, 2019. 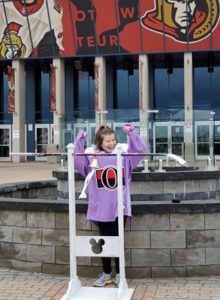 Bria Roberts (above) celebrates ringing the bell at Canadian Tire Centre in Ottawa Thursday afternoon. The 13-year-old Ottawa Senators fan rang the bell in front of her “happy place” after finishing 70 weeks of chemotherapy treatment for a cancerous brain tumor.