You are here
Home > Baseballology > Dog Days at Fenway Park

With the crowds having fun at the hub in Boston, with the team gearing up to go deep this October, with a roster loaded with talent and more on the way, a flashback to Sox in the Sixties is almost like culture shock.

September 28th, 1960, Red Sox vs. Orioles.  Overcast, dank, chilly the final day of the final home stand of the 1960 season. Only 10,454 showed up.  The game was not televised locally or nationally. “You Made Me Love You,” playing over the loudspeaker, created a melancholy  mood.

FRANK MALZONE:  I wish there was more people there.  They didn’t realize, you know.

Curt Gowdy, Red Sox radio and television voice, began the spare ceremony: ”Twenty-one years ago, a skinny kid from San Diego, California…”’ Boston Mayor Collins, seated in a wheelchair, presented a $1,000 check to the Jimmy Fund, the favorite charity of Ted Williams, 42, who was given a plaque by the local sports committee. The inscription was not fully read. Williams hated a fuss. 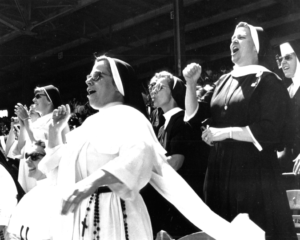 He even was annoyed by the news announced to the crowd that his uniform number, 9, would be permanently retired. It was  the first time the team ever honored a player that way.

Williams said over the loudspeaker: ”In spite of all the terrible things that have been said about me by the knights of the keyboard up there … and they were terrible things, ‘I’d like to forget them, but I can’t…. I want to say that my years in Boston have been the greatest thing in my life.”

FRANK MALZONE: Ted hit two balls good, the first one got into the wind in the right field corner and was pulled back and caught by the right fielder, the next one the center fielder caught.

CURT GOWDY (Game Call) “Everybody quiet now here at Fenway Park after they gave him a standing ovation of two minutes knowing that this is probably his last time at bat. One out, nobody on.

BOB KEANEY: Ted dug in, wiggled his fanny, and glared at pitcher Jack Fisher. Everyone stopped breathing. Ted swung as hard as he could, but he missed the fat pitch and nearly sprained his arms.    Some dreamers said later that Ted missed on purpose, so that Fisher would be fooled into throwing that fast ball again.

CURT GOWDY (Game Call)  Jack Fisher into his windup, here’s the pitch. Williams swings — and there’s a long drive to deep right! The ball is going and it is gone! A home run for Ted Williams in his last time at bat in the major leagues!”

JERRY CASALE:  I was in the bullpen with  Bill Monbouquette and Mike Fornieles and others. We were all  up front looking over the railing.  The ball went over our heads.

Williams circled the bases as he always did, in a hurry, with his head down trotting out Number 521, his final homer. The crowd stood and cheered the man and the moment.

BROOKS ROBINSON:  I was playing third base.   He went running around the bases, and I looked at him as he passed second base. I had my arms folded as he passed me. That was absolutely a magical moment to be a part of that history.

STEVE RYDER: He had that regal trot around the bases.  Didn’t tip his cap, didn’t look at the stands, just right into the dugout.

The inning ended and Williams went out to play left field in the the top of the ninth. Just before the inning began Carroll Hardy replaced him. “The Kid” ran in. The crowd had one more standing ovation in it.

“We want Ted. We want Ted!” The fans chanted. But he refused to come out for a curtain call. Later it was reported that players and umpires tried to get him to come out. No dice.

FRANK SULLIVAN:  We all wanted him to stop and at least take his cap off but that sonofabitch, he just ran into the dugout.  He didn’t stay around or let us say anything.    You know that was the way that Ted was.  He went down the dugout steps straight into the tunnel. That was it, aloha.  We didn’t know that that was his last game but we all suspected it.  We were out of contention, so he wasn’t robbing the team.  It was just Ted was Ted.

In My Turn at Bat, Williams wrote: “You can’t imagine the warm feeling I had, for the very fact that I had done what every ballplayer would want to do on his last time up, having wanted to do it so badly, and knowing how the fans really felt, how happy they were for me. Maybe I should have let them know I knew, but I couldn’t. It just wouldn’t have been me.”