The glory days are back at the Fens as the 2018 season heads down the home stretch. There is a lot of excitement about the real possibility of another world championship for the Sox. Royal and loyal rooters, though, still have in their memory bank images of a sad long ago time when life at Fenway Park was very different from what it is today.

This was the opening day lineup on April 19th as the new decade of the sixties began at Fenway Park. 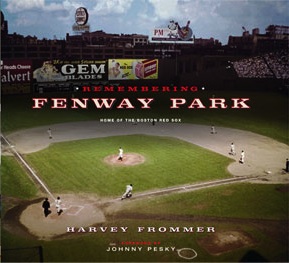 BOB SULLIVAN: I grew up in Chelmsford, Massachusetts in the 50s and early 60s.  My early games on TV from Fenway had everything to do with Curt Gowdy.  I can to this day regale one with the Narragansett Jingle. Games on the radio from Fenway were as resonant to me as going to the ballpark. My grandfather used to sit on the back porch in Lowell, Mass in his Mount Vernon Street home. I remember his cigar smoke and sitting on his lap and listening to the Red Sox.

I remember coming home one night with my brother from catching crappies, coming into the house, Dad sitting on the couch.  “Hey, come here and listen to this.”

CARL LOVEJOY: We’d park in the same area where  Boston University fraternities are now. We would walk past the wooden cart with the old wagon wheel and a guy who was the salesman with an apron and a hat, sort of a bender’s hat, the change maker on his belt.

You ’d hear the crack of the bat as you were buying peanuts and wanting to get inside to see batting practice, hoping to catch that foul ball.

I loved it when the foul ball would come down the screen and everybody would, “whoooop!”  and the bat boy would catch it.

Going into a public men’s room for the first time was to be intimidated. The urinals were troughs. And there were all these men and boys lined up.

HARRY BAULD:  Fenway was a place that you could go to the same way you went to the movies.  I paid 50 cents to sit in right field. The ushers were all those incredibly florid-faced old guys. They’d dust the seat for you.  I never did give them a tip. We were working-class kids.  It was hard enough for us to scrape up the 50 cents admission.

On July 22nd, 1960 Ted Williams homered in a 6-4 Sox win over Cleveland. In the seventh inning, he stole second base to become the first  Major Leaguer to steal bases in four straight decades.

BOB SULLIVAN: Dad wanted my brother Kevin and me to see Williams play before he retired, so he planned a big day. We were going to go in early and we were going to come back relatively late.

We drove down in the Oldsmobile with my brother and I on the back couch in the days before seatbelts and my mom sitting up front. I’m sure it took an hour and a quarter. We parked under the Common.   We took a taxi up, the first taxi we had ever taken in our lives.

Fenway was such a dungeon down underneath that you came out of the darkness and into the light.  This was like, oh my goodness, it was like sending you to heaven.   It was like a religion. Ted Williams. Fenway Park.  I, of course, was a young Williams fan.  And Dad was a World War II veteran, a Master Sergeant, and he was a Williams devotee.  There’s a myth now that all of the Boston fanship booed Williams. He was a prickly character.  But it was the sportswriters who had problems with him, personal problems, that they took out on him in the pages of the newspapers.

He played hard. The fans in left-field would heckle him and he’d spit and all the rest of it, but mostly the fans loved the guy.  And Dad, as a veteran was eternally devoted to this guy. His military background, his patriotism, his heroism.

We sat behind first base.  It was just some game in August.  There was no one in the park; they had given up on the team for every good reason.

Afterward, we got a taxi and Dad took us to Bailey’s for enormous ice cream sundaes, served in silver cups with gooey, dripping marshmallow.

Falling asleep on the back couch of the Oldsmobile, curled up back there with my brother, it was just great.

On the 25th of September Casey Stengel clinched his 10th pennant in a dozen seasons as manager of the New York Yankees as Ralph Terry edged Boston 4-3.

“I drove into the ballpark,” Curt Gowdy recalled,” parked the car, went into the clubhouse, and Johnny Orlando, the clubhouse guy, said, ‘Gowdy, Gowdy come here, this is the Kid’s last game ever.’

‘What do you mean? We have a series in New York this weekend.’

‘Mr. Yawkey told him to take the last two games off and go fishing. This is his last game. You have to promise me you won’t mention it to anyone.’

BOB KEANEY: I was a Lynn, Mass kid who loved Ted. I sat with my friend Bruce Jackson on the third base side, where John Updike sat collecting notes for his prize-winning essay on Ted’s farewell game.

Ted warmed up with a pre-game catch near the dugout with Willie Tasby and I loved that because Tasby lived in  Lynn, too,  ironically, Williams Avenue.

FRANK MALZONE: It was a cold day, the wind was blowing northeast in from right field, the kind of day you say nobody is going to hit one out.

Only 10,454 showed up. The game was not televised locally or nationally. “You Made Me Love You,” playing over the loudspeaker, created a melancholy mood.

==============================================           One of the most prolific and respected sports journalists and oral historians in the United States, author of the autobiographies of legends Nolan Ryan,Tony Dorsett, and Red Holzman, Dr. Harvey Frommer, a professor for more than two decades in the MALS program at Dartmouth College, was dubbed “Dartmouth’s Mr. Baseball” by their alumni magazine. He’s also the founder of www.HarveyFrommerSports.com.

His Ultimate Yankee Book has been called by critics “the Ultimate Baseball Book.” http://www.frommerbooks.com/ultimate-yankees.html  It can ordered signed, mint, discounted from the author.