The event moved to the Capitals practice facility this year. Once again, the NHLPA had a great group of very talented rookies for Upper Deck to shoot and for the media to talk to. Here are some insights that I walked away with

1) Jack and Quinn Hughes loved this event. They put their stamp on it early and never looked back. Quinn’s passes pop when they hit the stick. He’s much stronger than he used to be and that was evident here. Both brothers can really shoot the puck with a lot of accuracy:

Here’s a look at Jack’s blasting the puck:

2) Noah Dobson is definitely bigger and stronger. His general manager. Lou Lamoriello is taking a long look at him this year and I have to say I think he has a real shot at making the big club. They do have a need on defense and he really worked hard over the summer and it’s paying off.

3) Sabres goaltending prospect, Ukko-Pekka Luukkonen is healthy. He had hip surgery in the offseason and this event helped show off his progress. He didn’t do that much but he was skating around lightly and did show off a great shot, just in case he wants to play on the wing someday. He also collected Finnish League cards as a kid. I’ll need to see what they have online. I’ve never taken a look at them. 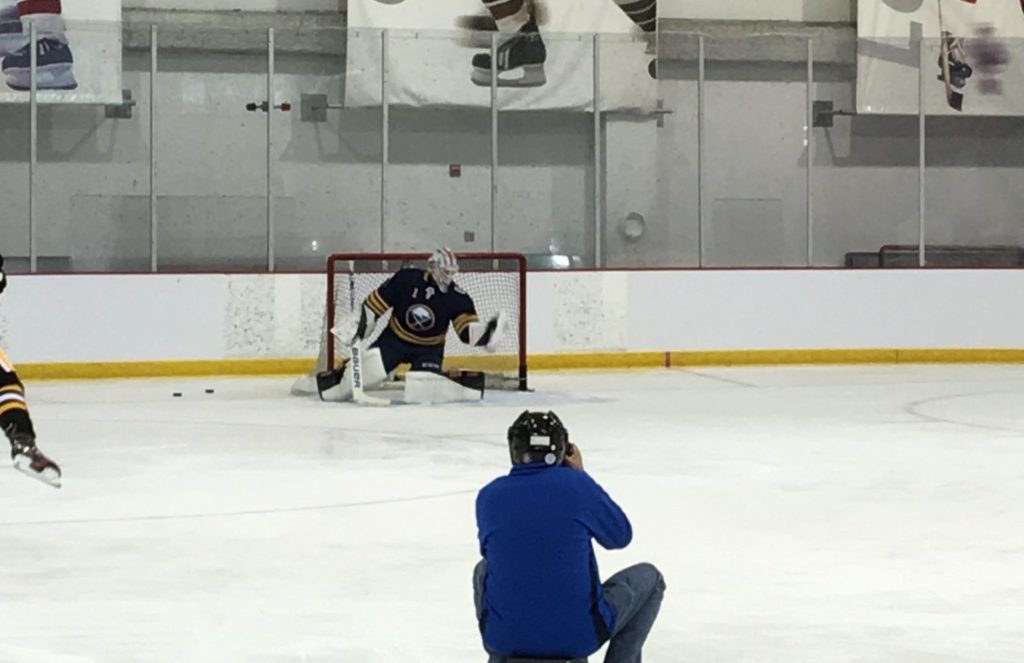 4) While players were taking slap shots and one-timers for the camera, I had a chance to see them all, close up. Here are my rankings for the hardest shots:

“It’s all exciting stuff. You dream about being on a hockey card when you’re a kid,” said Cozens. “Seeing that part of this is pretty cool just to be a part of this with the other prospects, rookies that are going to play in the NHL. I had lots of cards growing up. I think most of us did. I just had boxes of them, I had a lot of them for sure.”

5) Joel Farabee, a Flyers prospect, is faster and has better edgework than he did he since rookie camp. I’m 100% convinced he will get a long look and a real chance to crack the Flyers lineup this season. It really meant a lot to him to have the Flyers sweater on for this.