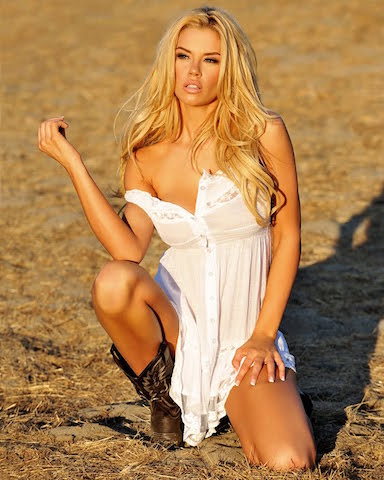 Jessa Hinton is a blonde bombshell who is driven by passion and a great work ethic. She happens to work for ESPN’s TOP RANK BOXING and all week she’s been covering the Manny Pacquiao – Juan Manuel Marquez title fight.

“This one is actually going to be on HBO PPV. So I am working for fight week for Top Rank which is generally on Showtime,” she said. “Hosting came around for me when I was asked to do a photo shoot for Victory Poker and they had asked a few other girls if they wanted to do some player interviews in their down time. They said no it wasn’t part of their pay and I said sure, I had nothing else to do. In-between the photo shoot I ended up spending 8 hours interviewing the players.”

And that’s how her career started but she did have a solid background before this job.

“I was a child actress growing up, modeling since the age of 14 but hosting never came up. I did drama and improve classes so I knew I liked doing that genre.”

“We had this huge television show we were going to launch and a few webisodes until “Black Friday” hit and that turned our worlds upside down,” she looks back on now. “It was hard to believe that most of these poker players were keeping “all” of their money and I mean “ail” of their money in these poker accounts. It sounded great for them at the time to dodge taxes.”

The poker story sounded bleak and then it got worse.

“I have a friend a host, Lacey Jones, she’s a huge poker host, she lost almost all of her savings…Here she is thinking she is going to host 8 or 9 TV shows, she had all of these contracts coming up, “Full Tilt” was paying her to play, most of her money was in “Full Tilt” and now she can’t get a job anywhere.”

After this door closed the boxing door swung open.

“How I got into boxing a good friend of mine is one of the main producers for Top Rank and he saw what I was doing and asked if I would be interested.Here I was I knew nothing about boxing,” she said honestly. “If you asked me about MMA I could tell you. Boxing was something my dad or uncle would watch. I knew the great fighters but I didn’t know about stats etc.”

“Still to this day there is so much stuff that you have to learn and keep up with its insane. I feel like I’m in college burying my nose in notes.”

Then she talked about watching an HBO show that changed her and made her realize that she needed to cover the sport of boxing as her main job. She is a self proclaimed “Jill of all trades”.

“The one thing that happened that is kind of sad, I just watched that HBO special of Frazier and Ali and that changed my mind about boxing completely. It was the greatest thing I ever watched. I didn’t know the behind the scenes stuff, who likes who, who fights who and who were friends and what really happened,” Hinton stated.

“You should have been at the press conference,” she said to me like we were old friends.”The President of HBO said they were airing the special tonight in honor of the passing of the great Joe Frazier and then Bob Arum took the mic and he flipped out saying “don’t believe anything you see on there. Ali was the greatest he’s not like that, you don’t know what went on behind the scenes” totally defending Ali. Then you watch the story and you want to punch Ali in the face. Are you kidding me? All the things he said, and he fronted Ali money when he had nothing, oh, it broke my heart and after that I realized it was important to know all of that behind the scenes stuff so I could use that to my advantage.”

We both agreed that Frazier was one of the great boxers of all-time and yet most never talked about it enough while he was alive.

“He didn’t get the respect at all that he should have gotten.”

We both agreed on that and the fact that in death he finally got that respect from everybody.

We both talked about the fact that the Rocky statue really should have been a Frazier statue, he meant a lot more to the area then a make believe boxer.

Well I did just that with her inspiration.

Getting back to the big fight.

”We have people asking with all that Pacquiao (33) does (out of the ring acting, winning a seat in the Philippine Congress etc.), how can he still be the pound for pound #1 boxer? How can he still come to the ring and dominate? Manny took an extra two weeks for this fight. Marquez I know has been training like crazy….I think Marquez feels he needs this more than Manny does (38). The boxing world needs this fight…Then after this fight Freddy Roach (Pacquiao’s trainer) said there is nobody else Manny should fight except (Floyd) Mayweather…if Manny wants to be done after this then he’s done…MMA is just taking over…Boxing needs these crazy decisive finishes not guys dancing around the ring people don’t want to pay top dollar for that sh##.

“I was supposed to be booked for a Playboy shoot for Saturday but now since my shoot has changed I will be blogging…I won’t be pulled in 8 different directions. With my all-access pass I can kind of be the fly on the wall.”

Pacquiao is a 7-1 favorite (10 titles and linear champ in 4 weight classes); Jessa also has an opinion on who will win this fight.

“I think Manny will win but I’m rooting for Marquez, it’s the end of a trilogy…I think its politics and the money talks…Nobody cares about anything anymore except Manny and Mayweather….This is something that will go down in history I would say there are only 10 great trilogies.”

Learn more about Jessa’s Playboy experience, her experience as an athlete, her day with a flight simulator and much more. Plus, look for her post-fight interview with me as well. Check out her blog on Saturday night, around 9PM/ET on http://jessahinton.com/.