You are here
Home > Hockeyology > Michigan’s Talented Trio – – Are All Three NHL Ready?  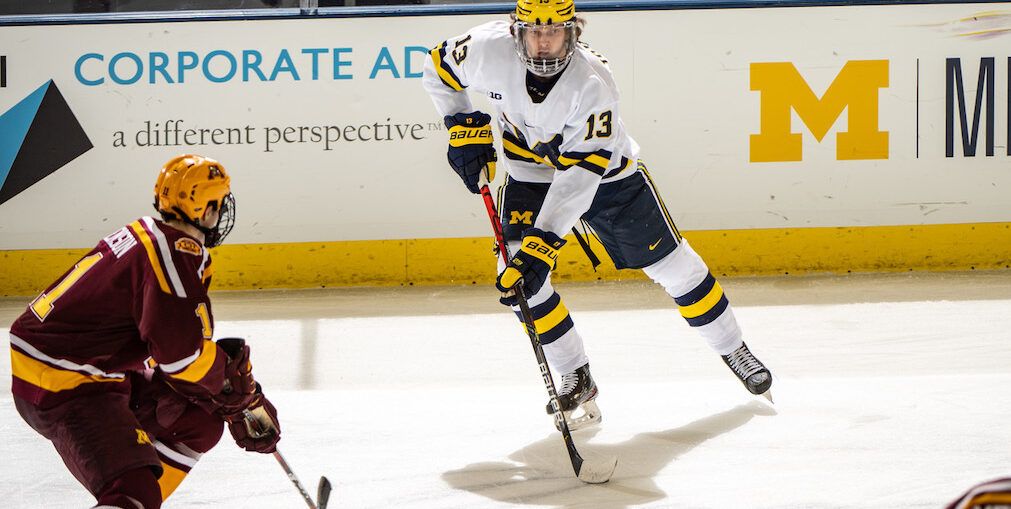 Matty Beniers is the Seattle Kraken’s future. He’s more important than anybody else on their current roster. With 38 points in 32 games, 18 of them being goals, I think he will leave at the end of Michigan’s season.  His two points in four Olympic games was a decent showing as well.

“I think I’m shooting the puck more. Confidence has something to do with it,” Beniers admitted. “Just working on my shot (chuckle). I used to not have a great shot. That’s always been something I’ve stressed to work on in the summer and practices. Last year, I would be in situations, and I made the pass instead of shooting. I’ve just been shooting a bit more this year.”

Beniers skating is terrific and he’s very smart on the ice. He’s a real two-way player and he is already good on face-offs. Whether he gets in Kraken games this year or next, maybe it’s a few in Charlotte but that may be iffy since it’s a shared affiliation in the AHL. Either way. He’s ready.

Kent Johnson is suited to be a left wing. The Blue Jackets are lucky to have him. His numbers suggest that as well. His 33 points in 27 games are impressive. He’s physically stronger than he was a year ago, and he’s perfectly suited to play where he is.  He will always be more of a playmaker than a goal scorer.

“I’ve worked a lot on my physical strength, and yeah mentally am getting smarter and getting better at every little part of my game,” said Johnson.

Johnson is terrific along the wall and has strong puck possession because of his edge work being able to outskate the defenseman. That may change moving up the ladder. I feel like he’s on the edge of being able to play in the NHL and should take one more year with Michigan to get stronger and work on his board game and a bit more physical engagement.

Power had 27 points in 28 games. He only had 21 penalty minutes with 43 blocks as Michigan advances in the playoffs. With Luke Hughes on the team as well, Power will sometimes do the hard work, something Hughes isn’t great at. He’s a team player who will do anything to win, and that’s what Sabres fans are hoping for. They could see him play with them before the 2022 season ends.

“I think we have a really good chance. We have to come together and play our game. We are all excited for it, “Power added. “It becomes more physical when the playoffs come around. It ramps up.”

Power is playing a tough defensive game. He says he doesn’t go out of his way to block shots but is willing to do it, and that’s going to make him an extremely good NHLer soon. Power is equipped to handle a lot of minutes. He’s averaging over 23 minutes a game with Michigan. Well over two minutes of that is on the penalty kill. Over three minutes of that is on the power play. Again, he doesn’t shy away from big minutes or being a leader.

“It’s a sign of the way the game is played now. Especially when killing penalties. I think a lot of time the pucks hit me by making myself big.”

Power is ready to play in Buffalo or Rochester depending on when his season ends.