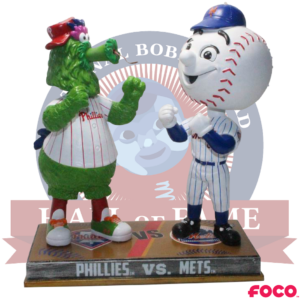 The bobbleheads, which begin shipping next week, cost $75 plus a flat rate shipping charge of $8 per order. They were produced exclusively for the National Bobblehead HOF by FOCO.

The rivalry bobblehead features Philadelphia Phillies mascot, the Phillie Phanatic, and New York Mets Mascot, Mr. Met, facing each other with their fists up. This is the first bobblehead commemorating the rivalry between the Phillies and Mets, who renew their rivalry with a three-game series at Citizens Bank Park this weekend. The NL East rivals have faced off 951 times since their first meeting in 1962, with the Phillies leading the regular season series 493-458.

“This bobblehead is the perfect way for Mets and Phillies fans to commemorate a great rivalry between two storied franchises,” Phil Sklar, Co-Founder and CEO of the National Bobblehead Hall of Fame and Museum said. “These will be cherished collectibles that celebrate New York and Philadelphia’s rich baseball history and strong rivalry.”

About FOCO:Previously known as Team Beans, LLC and Forever Collectibles, FOCO is a leading manufacturer of sports and entertainment merchandise celebrating more than 17 years in the industry. The company’s ever-growing product lines include apparel, accessories, toys, collectibles, novelties, footwear, holiday and more. FOCO is licensed with all major sports leagues including the NFL, MLB, NBA, NHL, NASCAR, MLS and over 100 colleges and universities as well as entertainment properties such as Disney, Warner Bros/DC Comics, Nickelodeon and Sanrio. Please reach out to Matthew Katz, Licensing Manager, mkatz@foco.com for more information.