You are here
Home > Footballology > The Unsealed Is Breaking New Ground

The unsealed is a new website that is breaking new ground. There’s a powerful duo running it. Lauren Brill, who worked at CBS affiliates in Cleveland and Buffalo. She’s a terrific writer to boot. Audra Frimpong is an attorney who was an All-American track and field athlete, who ran the 100m hurdles, 4×100 relay and long jump at the University of Alabama. She’s very modest about her accomplishments in sports but that adds a lot of depth to her writing.

“I have an undergraduate degree in advertising and business. Initially going into college, I thought I might be interested in that realm and then I got into law,” Frimpong revealed. “In law, I think I lost my writing and creativity in general; the writing is very black and white. With this, it has actually helped me get back into creative writing.”

Both founders were involved in an elevator “event” that changed the course of their lives.

“We got stuck in an elevator in Miami on vacation. We were so calm during the situation and after we got out of the elevator I said to Audra, ‘we work well together’. We should start a business,” Brill stated. “From there we started brainstorming and this was the idea we eventually settled on.”

“After the elevator drop (it was at the penthouse level and started bouncing), we opened up and shared personal stories we haven’t told each other before. We were both like, this would be a really good idea, to expand this beyond this conversation and have it be a community of people who discuss things and we should be the ones to create it,” said Frimpong. “I definitely thought we were going to die and felt like we should do something meaningful with our lives.” 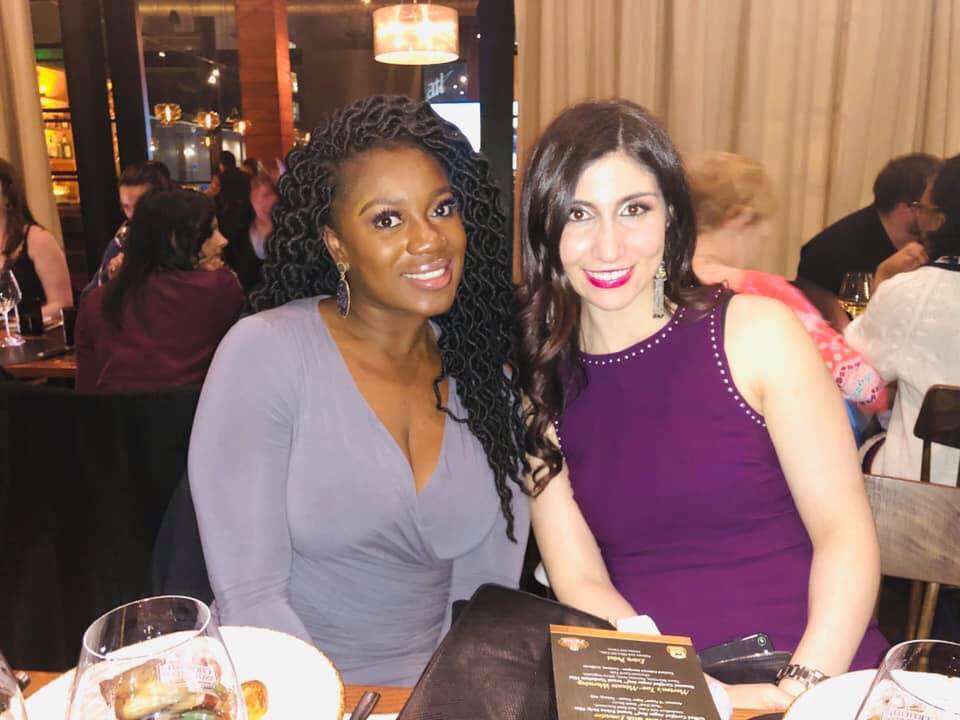 Brill did get to cover events that Cleveland fans had been dreaming about for decades.

“I feel like the industry as a whole is going away from local news especially local sports news. I felt like this was very good foresight into my future. Also, in terms of Cleveland people talking about me leaving when it’s getting good. I covered a World Series, the NBA Finals, an NBA Championship, it’s been good for a few years. Now the Browns are looking better. We’ll see, they still have to prove it in the regular season.”

The unsealed isn’t boring, everyday content. It’s all original content created by their user base and expertly written by the duo.

“We just wanted to be authentic. I did a few stories at Channel 5 in Cleveland. One was wearing my hair curly on-air and why I wanted to do that. Another was on my own sexual assault. That was in the form of a letter. And both of those stories got a lot of attention,” Brill said passionately. “One landed me on national television with CNN. And the other one got even more circulation than that one. People were constantly e-mailing me. Telling me their stories.

“This was before the “me too” movement. It wasn’t as comfortable sharing that type of story, or common, I just saw so much value in having someone’s own voice tell their story and I felt so empowered by it, and I realized that if I can use that same writing ability, that same authenticity can help someone else hear their story, it could have a much larger impact beyond my own story.”

With Carli Lloyd making headlines kicking a 55-yard field goal at an Eagles/Ravens joint practice in Philadelphia, the two co-founders had an opinion to share when that was met with mixed reviews, mostly by men, even though an NFL team invited her to kick in a preseason game.

“I think there’s still this mentality whether it be in a locker room or an office, in a law firm, I don’t want to get beat by a girl,” Brill commented. “I haven’t had any problems with athletes in the locker room with me. Athletes have always been great to me but that’s because I’m not competing with them either. I do think many athletes would embrace a female in the locker room. I don’t think that’s everyone. I think that’s some people.”

I told them about the tired argument of her possibly being hit by a 300-pound player that continues to be brought up even though she could avoid most of those situations on the field of play.

“I’m sure there are men who are the same weight and size as her. What’s going to happen if they get hit by a 300-pound man? Brill asserted and Frimpong interjected with “exactly”.

The duo is talented, they’re united, they’re ready to tell stories that affect people every day in hopes they can help them start the healing process. It’s a great website. I urge everyone to check it out. http://theunsealed.com could change your life.