Bio: 18-year-old catcher Lois Youngen joined the league as a veteran receiver and showed a great deal of ability. She was a catcher and outfielder for the Fort Wayne Daisies and South Bend Blue Sox from 1951 through 1954. After playing ball, she attended college, received her Ph. D., and taught, retiring as Director of Physical Activity and Recreation Services at the University of Oregon. The “Lois Youngen Ball Field” at Bethel Park in West Eugene, Oregon is named after her. Lois is currently a member of the board of directors of the AAGPBL Players Association and formerly served as President of the organization. 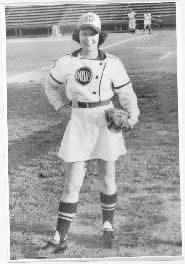 Russ: What was it like to play for Jimmie Foxx?

Lois: Jimmie was great, and we adored him. He was nothing like the Jimmy Dugan in our film!!! Spread the news on this truth!

Russ: Jimmie doesn’t have his number retired with any of the teams he played for, do you have an opinion about that?

Lois: As a member of the Baseball Hall of Fame I would have thought his number would have been retired by the Athletics (11 years and 302 home runs) and the Red Sox (seven years I believe).

Russ: Who was your favorite Cleveland Indians player growing up?

Lois: Everyone loved Bob Feller – we watched on the radio! Ha Ha!

Russ: You oversaw track and field at the University of Oregon, the women’s team. What was that like? Did you stay long enough to have any chats with Steve Prefontaine?

Lois: I was the first official women’s track and field coach at Oregon 1970, 71, 72, and part of 1973. The fact that I had team-taught a jog-run class with the legendary Bill Bowerman helped me in this job. In 1971 I took four women athletes to the 3rd National Intercollegiate Track and Field Championships for Women and we took seventh place! I met Steve and watched him train and compete many times…I did not know him.

Russ: Since you played catcher, what was that like and what do you think of the new catching rule in baseball reducing contact?

Lois: I think this rule will save some injuries and that is a good thing.

Russ: Did your parents support your baseball endeavors?

Lois: Yes, they did, and the research supports the fact that if the father is supportive the young woman will play any sport.

I want to thank Lois and Casey Blackwell for making this possible.