Saroya Tinker was drafted by the Metropolitan Riveters with the 4th overall pick in the 2020 NWHL Draft. She’s a strong defender out of Yale University. She’s a Toronto, Ontario native who will now spend part of the year in Northern Jersey. Like any prospect heading into the pros, she’s been dreaming about this for a long time.

“Going into I wasn’t sure where my career was headed. I decided that I wanted to continue playing. It will fit quite well with the Riveters,” Tinker said in a calm voice. “It’s been a goal of mine to become a pro player ever since the league started in 2013. I believe in what the league is building. I’m super excited.”

Kate Whitman Annis will soon enter her second year of being a general manager for the Riveters. It’s only the second-year clubs have had them and it’s important in the evolution of women’s hockey. The league could no longer handle so many situations for all of these teams, so it was inevitable.

“It’s interesting. I’ve been a part of the league for almost all six seasons. I was an assistant coach for the Riveters two years ago and then transitioned into the GM role, “said Annis. “The league realized that each need needed their own GM and created that position. It’s probably one of the most rewarding jobs I’ve ever had. I, like the players also have a full-time job and have four kids at home, we do it because we love it. One day I hope we can all be paid a full salary to do this and do this full time. That’s everyone’s goal.” 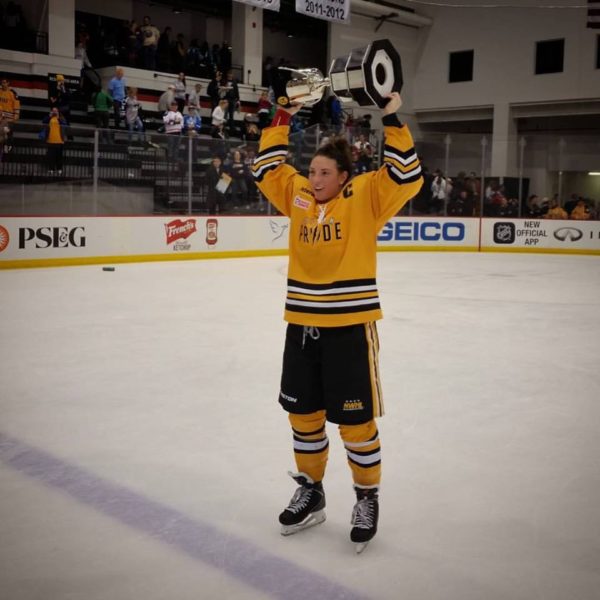 Tinker, a star player in college is a shot blocker. That’s not all she does but it may be the one thing that sets her apart.

“There’s a lot of reasons for us to pick Saroya. She brings size (5-9), and intensity and she will bring focus to our defense. She skated in all 32 of Yale’s games last year she took 67 shots and blocked 54 of them,” Annis stated. “That’s one of the things that we really value. That’s something we feel she can bring immediately to the team. It takes a certain amount of sacrifice to do that.”

“I’m not scared to block shots and I’ll do anything for my teammates,” Tinker added. “I think that’s part of the sacrifice you make when you decide to play on a team. It’s me wanting the best for my teammates and protecting the goalie behind me.”

“Being at Yale was challenging both athletically and academically. I think in my four years we built the program up with what we accomplished last season with our new head coach, Mark Bolding,” Tinker said. “I’m looking forward to watching my teammates continue to do that as we become a top-level team in the ECAC.”

Most defensemen these days are two-way players. As they move up the ladder and the talent compresses coaches want defenseman to be less chancy and make sure they can get back and cover in their own zone.

“Before my college career I was definitely a rushing defenseman, she stated. “After joining the ECAC, the player was so talented that I started to be more defensive-minded. Playing defensive was more important but I can pull it out of my back pocket when I need to.”

This prospect is a natural athlete well. She named three sports she was good at and I’m guessing there’s more.

“I was on my high school curling team. I played badminton. I played a little of everything. My main loves were basketball, hockey, and soccer and I hadn’t decided between those going into college, but hockey ultimately prevailed and here I am!”

In the states, she’s looking for places that serve poutine, and a lot of times she can’t find them.

“Occasionally, you can find a place,” Tinker chuckled. “It’s not as great as up here. I can tell you that.”

Here’s Renee Hess, the Founder and Executive Director of @BlackGirlHockey to announce the Fourth Overall Pick of the 2020 #NWHLDraft for the @Riveters 💪 pic.twitter.com/eBSswX9yZ2