Voorhees – – As Flyers rookie camp is getting ready to wind down. I thought with all the press the offense was getting that I’d highlight a few lesser-known defensemen.

He didn’t show much push back here at camp, but he has done that occasionally with the Silvertips. I’d like to see that more often.

Camp invitee, Sean Comrie (pictured above) has promise. The 6-0, and probably 170-pound defenseman is attending his first pro camp after a season in Denver where he didn’t get a lot of playing time, so he decided to join the Kelowna Rockets.

“It’s been great. My first NHL camp. It’s been pretty cool to see the players and facilities. It’s a first-class organization and I’m happy to be here,” Comrie said. “I didn’t play much last year and I wasn’t going to play much this year either. I just wanted to get back to playing hockey, so I decided to go to Kelowna.

“I think I’ll have a bigger role in Kelowna. I’ll be an older guy on the blueline. I think I’ll bring lots to the table for them. I think we’ll have a really good team too. We’ll have a good chance at the Mem Cup this year. I think I’ll be a good two-way defenseman. I’ve played against older guys so I can play against bigger guys and the other teams’ better players and handle them in our own end.”

The year before for the Spruce Grove Saints, in the AJHL, he had 34 points in 54 games and 9 in 13 playoff games. Colton Parayko and Cale Makar played there to name a few.

Who knows if the Flyers will sign him? At 19, he can still make a name for himself. I’ll be tracking him for sure. 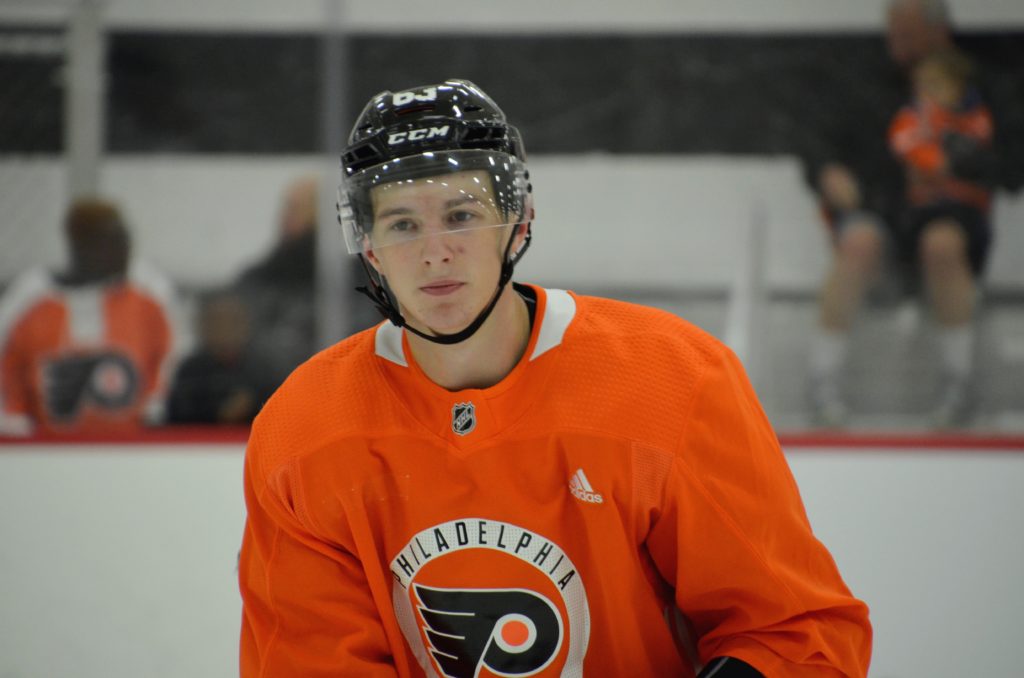 Mason Millman is the next guy. He was a 4th rounder in the 2019 NHL Draft. He was a 17-year old who played with Saginaw and the numbers were good but not elite and now after going through this camp, he is revealing the type of player that he is.

His speed up the ice is good. He has a very active stick on defense, and he takes good angles.

“Just playing my game. Having fun with it. Our fans are our biggest support, so you have to be fun with them and have a good time with them as well,” said Millman. “I try and use angles and outsmart guys. I’m 6-1, 170 pounds so every once in a while, I come up against a guy I can’t necessarily outmuscle. A lot of my game is stickwork and picking pucks off guys and trying to read guys and getting the right angles on guys. I’d say I’m a strip the puck type player.”

Egor Zamula has looked good. He’s looked good for a while now. With added power, his passes now have a lot of zip on them. He’s listed at 6-3, 172 but I bet he’s heavier than that. He’ll go back to Calgary for another season and then turn pro next year if he stays the course.

*photos courtesy of the Philadelphia Flyers